Ancestor Trouble is Out!

Ancestor Trouble is out in the world! If you follow me on social media or receive my newsletter, you may have heard plenty about it by now, but if not, here are some highlights.

The New York Times review by Kerri Arsenault is a dream (“extraordinary and wide-ranging,” “a literary feat”), as are reviews by Lorraine Berry for The Boston Globe (“beautiful and complexly nuanced,” with “memoir parts [that] read like a suspense novel”), Colin Dickey for The New Republic (“does what all truly great memoirs do: It takes an intensely personal and at times idiosyncratic story and uses it to frame larger, more complex questions about how identity is formed”), and Lesley Heiser for the Los Angeles Review of Books (“great beauty, poignancy, and power”). Ancestor Trouble was NPR’s Book of the Day yesterday, alongside Jhumpa Lahiri’s Whereabouts.

Esquire published an adapted excerpt. (“I have loved my father, and I have feared him, but I have never understood him.) The Wall Street Journal features an excerpt this weekend. (“The stories we tell ourselves about our ancestors have the power to shape us, in some ways nearly as much as our genetics do.”) And today Time runs an adapted excerpt on my mysterious great-great aunt Maude Newton, who turned out to have been a writer, but… not the kind I would have hoped.

I have discussed the book on NPR’s All Things Considered, the New York Times Book Review podcast, Miwa Messer’s Poured Over podcast for Barnes & Noble, Maris Kreizman’s The Maris Review podcast, Ethan Nichtern’s The Road Home podcast, and more. You can watch my conversations with Maaza Mengiste at Books Are Magic (launch, live in person, 3/29), Alexander Chee for the Mark Twain House (4/1), Casey Cep for the New England Historic Genealogical Society and Porter Square Books (virtual, 4/4), and Honorée Fanonne Jeffers for Magic City Books (virtual, 4/5). I also got to visit Square Books before my discussion on unhappy families with Liz Scheier, moderated by Lyn Roberts, for the Oxford Conference for the Book, where I met a cousin who realized we were distant cousins while sitting in the audience, a very Mississippi experience. (Hi, Barbara!) Later this month I’ll have the honor of discussing Ancestor Trouble with Roxane Gay for her Audacious Book Club.

BookPage ran a very nice profile of me by Harvey Freedenberg, who also praised the book in a starred review. Other interviews and Q&As have run in The Dallas Morning News, Shondaland, Bloom, and The Rumpus, and I answered ten questions from Poets and Writers, talked books with Shelf Awareness, and did an early interview with Jeanna Kadlec.

Ancestor Trouble is a New York Times pick, a Los Angeles Times pick, one of Vanity Fair’s “seven books we couldn’t put down,” a CNN pick, a Vulture pick, a Wired pick, an Observer pick, a Bookshop book of the week, an Apple Books pick, a Lit Hub pick, a Vol. 1 Brooklyn pick, and an Amazon editors’ pick.

Other reviews, largely positive, some with minor quibbles and some more mixed, are from Libby Copeland in The Washington Post, Kristen Martin for NPR, Jeff Calder for the Atlanta Journal-Constitution, Katherine A. Powers for The Star Tribune, Mary Ann Gwinn for the Los Angeles Times, and Alix Christie for The Economist. BookPage calls me a writer to watch, and says “Newton is a master at taking a complex, far-reaching topic and making it magnificently intimate.” Esquire’s Adrienne Westenfeld has named Ancestor Trouble one of the best books of the year.

The book was anticipated by Oprah Daily, Time, The Millions, the Chicago Review of Books, Deep South Magazine, the Southern Review of Books, Apartment Therapy, and Goodreads readers. It’s received shout-outs from John Warner at Biblioracle, Liberty Hardy at BookRiot, and Austin Kleon.

For Literary Hub, I wrote a piece on finding my way to Ancestor Trouble after years of resisting writing a memoir; along the way, I share some craft advice. I also wrote an Ancestor Trouble playlist for Largehearted Boy.

If you’re interested picking up a copy of the book, it’s available just about everywhere, including Bookshop.org and possibly your local indie. Greenlight Bookstore is still accepting orders for signed copies (enter your request for a signed book in the order comments at checkout), and I also signed quite a few copies at Books Are Magic, if you’re in the nabe or would like to reach out to them, and a dozen even closer to home, at Astoria Bookshop. I’m going to do my best to hit McNally Jackson, Center for Fiction, and Book Culture (on Broadway) — all of which have it in stock — over the next week to sign copies there as well.

The image at the top of this post is of Maaza Mengiste and me at Books are Magic on March 29, and was taken by my editor, Andrea Walker. 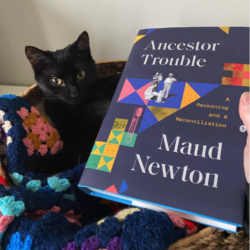 Maud Newton’s Ancestor Trouble is anticipated this month by the New York Times, the Los Angeles Times, CNN, the Millions, the Chicago Review of Books, Apartment Therapy, Goodreads readers. Esquire has named it one of the best books of the year so far. 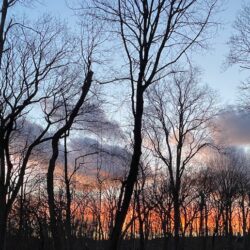 The Truth Will Set You Free

I don’t ordinarily link to my newsletters here nowadays, but I’m making an exception for the latest, “The Truth Will Set You Free.” It’s about how wrestling with wrongs of my ancestors, rather than being a miserly, judgmental, closed-off process, has been an incredible opening. I’m also giving away an advance copy of Ancestor Trouble. And there are some good links . . . 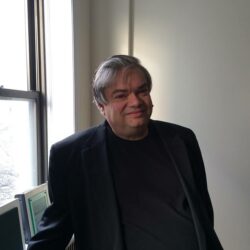 My friend Terry Teachout, a theater and arts critic, a biographer, playwright, and librettist in his own right, first known to me as a blogger, died suddenly last week. I’ve struggled to express what a shock and loss his absence is. Terry loved to laugh and was a delight to laugh with. He loathed pretension. He enjoyed wit. When we . . .