A Reckoning and a Reconciliation

An acclaimed writer goes searching for the truth about her wildly unconventional Southern family—and finds that our obsession with ancestors opens up new ways of seeing ourselves.

Maud Newton’s ancestors have vexed and fascinated her since she was a girl. Her mother’s father, who came of age in Texas during the Great Depression, was said to have married thirteen times and been shot by one of his wives. Her mother’s grandfather killed a man with a hay hook and died in a mental institution. Mental illness and religious fanaticism percolated through Maud’s maternal lines, to an ancestor accused of being a witch in Puritan-era Massachusetts. Maud’s father, an aerospace engineer turned lawyer, was a book-smart man who extolled the virtues of slavery and obsessed over the “purity” of his family bloodline, which he traced back to the Revolutionary War. He tried in vain to control Maud’s mother, a whirlwind of charisma and passion given to feverish projects: thirty rescue cats, and a church in the family’s living room where she performed exorcisms.

Their divorce, when it came, was a relief. Still, the meeting of her parents’ lines in Maud inspired an anxiety that she could not shake; a fear that she would replicate their damage. She saw similar anxieties in the lives of friends, in the works of writers and artists she admired. As obsessive in her own way as her parents, Maud researched her genealogy—her grandfather’s marriages, the accused witch, her ancestors’ roles in slavery and genocide—and sought family secrets through her DNA. But sunk in census archives and cousin matches, she yearned for deeper truths. Her journey took her into the realms of genetics, epigenetics, and the debates over intergenerational trauma. She mulled modernity’s dismissal of ancestors along with psychoanalytic and spiritual traditions that center them.

Searching, moving, and inspiring, Ancestor Trouble is one writer’s attempt to use genealogy—a once-niche hobby that has grown into a multi-billion-dollar industry—to expose the secrets and contradictions of her own ancestors, and to argue for the transformational possibilities that reckoning with our ancestors has for all of us. 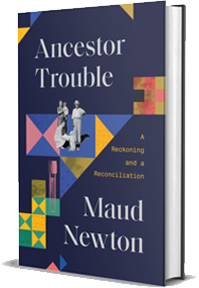 “Ancestor Trouble is a memoir like no other I’ve ever read: it’s an addictive mystery story, an unflinching examination of America’s darkest history, and a plangent meditation on the power of long-buried secrets to assert themselves in our lives. With astonishing erudition and empathy, Maud Newton has woven together sociology, science, and her own genealogical sleuthing to craft a narrative at once universal and intensely personal. A haunting, thought-provoking, and utterly mesmerizing book.” -Abbott Kahler, New York Times bestselling author (as Karen Abbott) of The Ghosts of Eden Park

“Ancestor Trouble is a superbly written and meticulously researched book about the people and stories that shape us. Through careful examination of census records, genealogy, and DNA data, Maud Newton patiently excavates her family’s troubled history, revealing how the past continues to inform the present, in ways that are sometimes invisible to us. An extraordinary work” -Laila Lalami, author of The Other Americans

“One of the most uncompromising and compassionate books about the tangled web that binds us to our past. Maud Newton writes with fierce brilliance about family, racism, mental illness, and the personal and national burdens of history. What do we owe our ancestors? How much of their sins become our responsibilities? In this magnificent book, Newton refuses to look away from her most intimate and painful moments, and in the process she leads us towards a vision of what individual and national healing might look like. Startling in scope and breadth, Ancestor Trouble firmly establishes Newton as one of our most exciting — and necessary — writers.” -Maaza Mengiste, author of The Shadow King, shortlisted for the Booker Prize

“Ancestor Trouble lifts the veil between our present moment and past generations, some long buried, who shape our lives whether we realize it or not. With cultural analysis, global historical contexts, and her own compelling hunt for family history, Maud Newton invites us to consider our ancestors with a reverence Western thought often forgets.” -Sarah Smarsh, New York Times bestselling author of Heartland

“Whether they are writers, womanizers, preachers, or enslavers, Maud Newton soberly reckons with her ancestors in this absorbing narrative, as addictive as genealogy itself. In reflections ranging from the scientific to the spiritual, Newton builds a bridge between her and her ancestors that is fascinating, deeply moving, and sure to make every reader want to spend some time with their kin.” -Dionne Ford, co-editor of Slavery’s Descendants: Shared Legacies of Race and Reconciliation