I’ve enjoyed the continuing responses to my recent letter of recommendation for the word y’all in the New York Times Magazine. A particularly interesting follow-up mentions my own evolution on the word in the context of a larger argument from David B. Parker, a professor at Kennesaw State University, who says he’s traced usage of the word back as far as a William Lisle poem published in London in 1631, more than two hundred years before the earliest OED citation.

According to the “Oxford English Dictionary,” the word first appeared in print in 1856, and all of its examples are sources connected to the American South. Michael Montgomery, a noted linguist, said that early use of the word “is unknown in the British Isles.”

But recently I used some of the new digital literary databases to search for older uses of the word, and I found over a dozen examples. They were all in dramatic or poetic works dating back to the 17th century and published in London. The earliest “y’all” that I uncovered was in William Lisle’s “The Faire Æthiopian,” published in 1631 – “and this y’all know is true.”

My examples push “y’all” back 225 years before the citation in the “Oxford English Dictionary,” and they show that the word appeared first in England rather than the United States.

I think it’s important to point out that it originated in a more formal context than what’s commonly assumed. There are none of the class or cultural connotations of the later American [OED] examples.

‘Y’all,’ that most Southern of Southernisms, is going mainstream – and it’s about time, David B. Parker, Kennesaw State University

I haven’t gone digging into those databases of old English literature, myself, but I’ll be following all this excitedly.

Ancestor Trouble is a best book of 2022, according to The New Yorker, NPR, The Washington Post, Time, and Esquire. It was also a New York Times Editors’ Choice selection. Much gratitude to all the editors and critics who made these decisions and conferred these distinctions in a truly wonderful year for books. 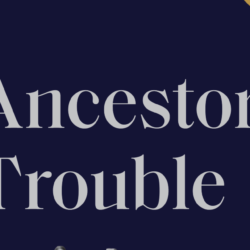 Writing About Abuse is Not Abuse*

If you are a writer struggling with the ethics of sharing your own history, remember that dragging these experiences out of hiding does not make you the harmful one. 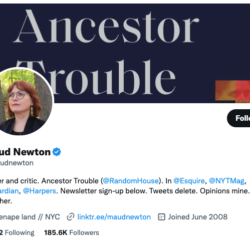 You Can Have Your Blue Check Back

TL;DR: What the hell is this timeline we’re living in? Far more asinine than I ever imagined. I’m still deciding what to do with my Twitter account, which I started fourteen years ago and where most people who follow my work follow me. Meanwhile here are some thoughts. Also, please vote.