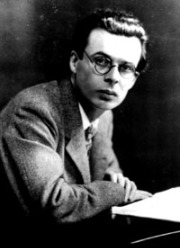 The trick, he says, is to abandon the idea that you’re going to work your way through the Western canon on a two-week tour of France.

A perfect book to take along on a trip is one “of such a kind that one can open it anywhere and be sure of finding something interesting, complete in itself and susceptible of being read in a short time.” He suggests, among other things, poetry, La Rochefoucauld’s Maxims, and “the aphoristic works of Nietzsche.”

I was surprised by his choice for “best traveler’s book of all”: “the twelfth, half-size edition of the Encyclopedia Britannica.”

Obviously Huxley conceived of his ideal portable library in a much earlier era, when “india paper and photography” were still something of a marvel, but his description of the encyclopedia, and the enjoyment the reader derives from it, remind me of nothing so much as the Internet — when at its most addictive, pointless, and glib:

A stray volume of the Encyclopedia is like the mind of a learned madman — stored with correct ideas, between which, however, there is no other connection than the fact that there is a “B” in both. From orach, or mountain spinach, one passes direct to oracles. That one does not oneself go mad, or become, in the process of reading the encyclopedia, a mine of useless and unrelated knowledge is due to the fact that one forgets. The mind has a vast capacity for oblivion — providentially, otherwise, in the chaos of futile memories, it would be impossible to remember anything useful or coherent…. Five minutes after reading about mountain spinach, the ordinary man, who is neither a botanist nor a cook, has forgotten all about it. Read for amusement: the Encyclopedia serves only to distract for the moment. It does not instruct, it deposits its nothing on the surface of the mind that will remain. It is a mere time killer and momentary tickler of the mind. I only use it for amusement on my travels; I should be ashamed to indulge so wantonly in mere curiosity at home, during seasons of serious business.

(I say this with huge affection, knowing that the online world contains a great deal of knowledge, insight, and wisdom, but also that you have to wade through the mountain of spinach and sidestep the oracles to find it.)

Pick up the issue for Huxley’s full essay.

Gustave Flaubert’s letters to he woman he called “my youth”