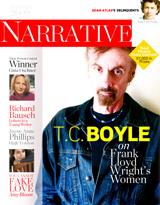 I once joked that I was suffering from a case of literary blue balls when I bought an issue of a magazine after enjoying an online excerpt of a Saïd Sayrafiezadeh story that ended with the line “‘My cock feels full with the thought of you in my heart.'” Only when my credit card was charged did I discover that the issue would not be immediately available online but would arrive in one to two weeks.

In the end, the wait was worth it — The Paris Review always is — and I wound up feeling bad for being so crass and impatient. But I’ve always been an instant-gratification reader when in the midst of a story I love, and that’s part of what first drew me to Narrative, the magazine Esquire recently called “The gold standard for online literary magazines.”

These days editors Tom Jenks and Carol Edgarian publish Narrative in its entirety both on the Internet and in print. (Electronic access is, and has always been, free — although you have to sign up — and now you can purchase the hard copy at your local bookstore.) Regardless of format, the work published in Narrative is always diverse and engaging.

When I started reading the site, which I discovered after my friend Pia Ehrhardt was first published there, I wasn’t submitting my fiction, there or anywhere else. I was just working on my novel, and reading.

But in late 2007 a couple of friends started pushing me to send an essay and a novel excerpt out to three of my favorite literary magazines. Narrative was the only magazine I chose that charged a reading fee. I figured I’d gotten more than two fees’ worth of enjoyment out of it over the years, and this would be a way to support the project even if the editors didn’t like my work.

Well, I guess they liked it. The essay won second prize in last year’s Love Story Contest, and the novel excerpt is up at Narrative Backstage — a paid-subscription part of the site — and it will appear in print and free online in the spring issue of the magazine.

Initially I was nervous to put part of the novel out into the world before the book was done, but Tom’s (and Mimi Kusch’s) light but perfectly targeted comments and edits have helped me to focus my thinking about the overall story. And it was incredibly affirming to receive a check in the mail for a project that, because I’ve been working on it isolation for so long, sometimes seems like something I’m only pretending to write.

Recently Narrative took its electronic presence a step farther, when it became the first literary magazine to be made available on Kindle. As of early January, Narrative was ranked fifth — above The Atlantic — among magazines in periodical sales. And at a cost of only $3.49 per month, it’s bound to keep drawing new readers.

Tom agreed to take a few minutes to answer my questions about Narrative and the electronic distribution of literature.

Do you think the magazine benefits from being made available in both print and electronic form?

We should probably be thinking more about the benefit to the magazine — in the sense of commerce — but our primary thought is of the benefit to readers and writers. We’re working hard to create as many channels as possible to reach as many readers as we can and to connect the authors, artists, and photographers whose works we love to a wide audience. We’ve found no compelling reasons to slide back into the bricks-and-mortar publishing mode at a time when it is steadily constricting — we are fully committed to digital publishing — but a fractional portion of our readers are tech challenged or simply prefer hard copies and asked for them, so we obliged beginning in the Fall of 2007, after we’d already been online for four years. We also provide hard copies for libraries, and we syndicate the magazine electronically to libraries as well. There’s no doubt that the electronic version has and will continue to enjoy the overall widest circulation. If we do nothing to market the magazine, we see an average of a thousand new readers coming to the magazine each month simply by Internet word of mouth. In other words, passively, the magazine’s circulation grows by 12,000 readers a year, and we increase that number by doing all we can to get the word out. The goal simply is to sustain literary work, interest, and appreciation via the most obvious means — the new media. It’s inevitable.

You’ve written extensively about your and Carol’s sense that the Internet can help keep literature alive. Could you summarize your thoughts?

That’s not a question with a brief answer! Here’s the latest Ed Note, published this week, on the subject.

When did you decide to make Narrative available to Kindle users?

We first started talking with Amazon in late 2006, and by early 2007, we were in weekly discussions with them for more than a year. We sought these discussions because when we asked ourselves how to reach as many readers online as possible, the answer seemed to be by working with Amazon. Initially, we explored possibilities involving hard-copy publishing and distribution, but we already anticipated that the electronic reader and other means of digital delivery would be the future. When Kindle debuted, we knew we wanted Narrative to be on it, and we were also discovering from conversations and test marketing with hard-copy book and magazine distributors who had approached us that the old model of publishing and distribution was not nearly as compelling as the new model. The problems and inefficiencies associated, for instance, with speculative printing and binding of material, warehousing, shipping, stocking, returning, storing, remaindering, and pulping are reduced, if not eliminated altogether, in digital publishing. Also, the connection between writers and readers can be made much more quickly and directly via the digital model.


Do you think you’ll work with any other electronic readers? (I don’t have a Kindle, but am crossing my fingers for iPhone availability.)

We are already working on a Narrative iPhone application, and we think that in the future many other means of digitally connecting readers and writers will develop. As with the advent of computers and of the Internet, the human imagination continues to be immediately engaged with the creative possibilities involving how written material reaches readers.

Do you believe that fiction will change as it increasingly meets technology? If so, do you think the change is something to fear?

We’ve already seen variation in forms. It happens in all ages, not only in relation to publishing models (think of the three-volume novel popular with lending libraries in George Gissing’s time) but also as an expression of the of the times. Early online periodicals, such as Slate and Salon, started with the premise that readers would not stick with online articles longer than 1,000 words. One of the things we set out to do was provide a place for longer work. One of the advantages of Internet publishing is that we are not constrained for space the way print periodicals are. But on the other end of the length spectrum, we are also seeing writers playing with very short forms, particularly suited to quick reading online.

Fear? No, no fear. Reasonable concern perhaps. Reviews and criticism have all but disappeared from many newspapers. In place of the old-school, long-developed, hard-copy print conversation about books and literature, Amazon reader reviews, blogs, and Oprah are reporting on what’s good and what’s not. As Amazon likes to put it, the readers decide. And indeed they do, and there’s nothing the matter with that, though it is not the same thing as the lens provided by a dedicated, aesthetically knowledgeable, accomplished critic or reviewer with a humanist view, or a body of such individuals with well-supported venues from which to speak. The New York Review of Books remains the last well-sustained place for this kind of activity.

The concern is over the growing sense, online, that anyone’s opinion about literature is as valid as anyone else’s, and given the overwhelming mass of information and conversation online, and given the temptation to take so much in and to respond to it in some way, a lot of mere, hasty opinion passes for thought. As the newspapers and print magazines constrict and curtail many of their features, it is vital for the best, most knowledgeable, talented, and sophisticated observers of culture to find places in the new media and for reliable, recognized sources of criticism and review to be established, much more so than at present. It is also important that places exist to encourage and support young talents — reviewers and critics — to grow up into an established literary conversation about writing and “books.” Generally, there has been a lowering of the bar in terms of the quality of appreciation, of understanding, engagement, and, let it be said, professional editorial and publishing skill and principles around literary work.

It’s a bit risky to generalize in this way, but anyone who has been observing the trends over the past thirty years, and dedicated literary writers, in particular, has witnessed and experienced a decline. And this problem is precisely where the new media present their challenge and opportunity, and because the future is always irresistible — it comes whether you want it or not — the opportunity is as great as, if not greater than, the challenge. Ingenuity, resourcefulness, imagination, creativity, passion, curiosity — all these and more will shape, as they always have, the literature that is written today and that lasts into tomorrow.

Publishing and writers in the Great Depression