Publishing and writers in the Great Depression 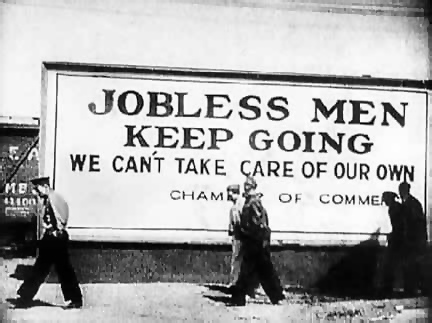 Amid all the discussion of massive layoffs and restructuring in publishing, I keep hoping someone will take a detailed look at how books fared during the Great Depression, and consider how the current economic crisis compares.

Conventional wisdom holds that books have done well in hard times, because they’re cheaper than many other gifts people might give. Even without reference to hard numbers, however, the emergence of the (cheap) paperback in the mid-1930s seems to undercut the idea that publishing has sailed through previous major downturns.

“I don’t know how I’ll get along unless I sell a story,” [Cheever] wrote Denney, a few days after moving to [Walker] Evans’s studio [in January 1935]. It was, perhaps, the worst time in history to be starting out as a writer. In 1934, only fifteen authors in the United States sold fifty thousand or more books, and the magazine market was even more straitened; advertising was at an all-time low; and many of the mass-market, high-paying “slick” magazines had either shrunk or folded.

As for the WPA, Cheever wrote later that year, “I can’t get a WPA job because I can’t get on relief because I can’t establish residence… And there don’t seem to be any other jobs.” Read more about the WPA Writers’ Project — and Cheever’s take on it — here.

The poems of Barack Obama