Florey’s Script & Scribble: on the death of cursive 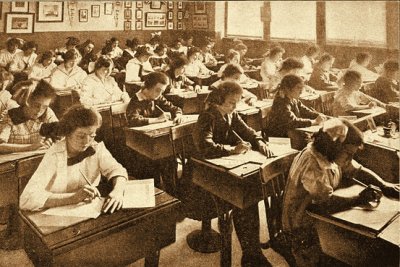 My current contribution to NPR’s Books We Like is devoted to Kitty Burns Florey’s Script & Scribble: The Rise and Fall of Handwriting:

At five, teary-eyed, I announced to my mother that I never wanted to grow up, because adults’ handwriting was ugly. When she asked what I meant, I pointed to her signature — a towering and illegible series of loops that barely fit in the space allotted — on a check she’d just made out. I couldn’t even read cursive then, much less write it, but I was a bit of a hall monitor as a young child, and her penmanship didn’t even seem to be the same species of writing as the flowing, even curves that covered the chalkboards in the second and third grade classrooms.

Nowadays kids are lucky if they learn to write as legibly as their parents did. As Kitty Burns Florey observes in Script & Scribble: The Rise and Fall of Handwriting, in our rushed, computer-obsessed society, schoolchildren increasingly are taught printing for a year or two, given a year of slapdash instruction in cursive, and then introduced to the keyboard sometime around grade three. It’s not difficult to imagine a time, maybe a century hence, maybe sooner, when only experts can decipher the dips and curlicues of handwriting styles so prevalent in the 19th and 20th centuries.

The author’s perspective is nuanced and interesting; she doesn’t just spend 200 pages wringing her hands. You can read the rest of my appreciation, including a brief description of Florey’s very practical solution, at the NPR site.

For other perspectives, also positive, see Michael Dirda’s for The Washington Post, Albert Mobilio’s at Bookforum, and Cullen Murphy’s in The Wall Street Journal. The image above, of students practicing the Palmer Method, is taken from the Journal review.

The latest from Zoë Heller