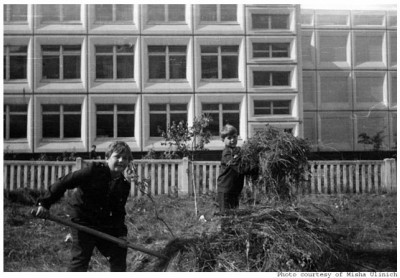 I read Anya Ulinich’s latest story, The Nurse and the Novelist, as a smart satirical comment on the contemporary shtetl-fantasy novel.

New York’s Michael Idov, on the other hand, reads it as an “entire work of fiction [written] with the sole purpose of a barely disguised personal attack on Jonathan Safran Foer.”

I asked the author how she felt about seeing her story characterized as a hit job rather than the larger comment I’d taken it to be. Here’s what she said:

To describe “The Nurse and the Novelist” as a “an entire work of fiction [written] with the sole purpose of a barely disguised personal attack” is to dismiss it completely, no matter how much it flatters me to see my name in the same sentence as Safran Foer’s (who I’m sure doesn’t care one bit about any of this.)

“The Nurse and the Novelist” is hard on atrocity kitsch fiction and on “making sense of the past” (i.e. fatalistically arranging the past) as part of a contemporary character’s self-exploration. What’s appealing about atrocity kitsch is that there is always a strong hero. There is also a record keeper, a paper trail, an old love letter, an old key, what have you. At the end of the story, somebody becomes stronger. (Manipulation is blatant, like in that recent German movie, The Lives of Others, where the persecuted writer is a fine specimen of manhood often costumed in scoop-neck undershirts, and the scum-of-the earth minister is fat and weasel-faced. Reverse their casting and this movie falls apart like a house of cards.) Of course it is the job of the artist to manipulate the audience, so I suppose “The Nurse and the Novelist” pokes fun at badly done manipulation. The nurse character is a curmudgeon and a nut, and her grandmother’s history is a fine example of what happens to ordinary people come times of atrocity. The weak scramble to survive when they’re in a pickle. Their weaknesses come to the fore, betrayal goes unpunished, people would rather forget, ordinary life continues in utilitarian apartments.

Image taken from a collection of 1980s Soviet photos at the author’s website. For more on ordinary life continuing in utilitarian apartments, see Kevin Kinsella’s delightful interview with Ulinich, or read her novel, Petropolis.

2666 reading group includes editor — and you?