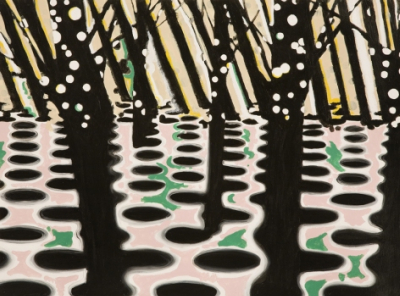 Thanks to all who came out to Housing Works for our Witches, Demons, and Thieves Puritan Halloween party last night. I’m on deadline, so no time for a recap, but we had fun.

For those who couldn’t make it, here’s the kinda-on-theme trivia quiz we handed out. The best part — aside from William Boggess’ questions — was that the winner, Leah, leapt out of her seat in amazement when told she’d won (with 8/10). She was so excited, I felt like a preacher at a tent revival, but I resisted the impulse to commence the laying on of hands.

1. Which New England author wrote, in praise of Hawthorne’s “Young Goodman Brown,” “It shall be yours to penetrate, in every bosom, the deep mystery of sin”?

2. Witches aren’t unique to New England. According to Roald Dahlâ€™s book The Witches, they are most plentiful in Norway. Identifying Dahlâ€™s witches is a little more of an exact science than it was in Salem, however. Which of these characteristics do Dahlâ€™s witches not have? (Contributed by William Boggess.)

a) They are hairless, forcing them to wear itchy wigs
b) They are toeless, making it nearly impossible to wear fashionable womenâ€™s shoes
c) They have cobalt blue saliva, so they can never spit
d) They have extremely hairy legs, so they must always wear long pants

3. It was Puritan custom to let a house struck by lightning burn down, in deference to the will of God, while trying to preserve the other dwellings nearby. Which sometime admirer of Cotton Mather made a scientific discovery that called this practice into question?

4. Strings of deaths in families led to the belief, in 19th Century New England, that one of the dead had transformed into a vampire and was returning at night to feast on everyone else. In the most famous of these cases, when Mercy Brown’s brother became ill soon after her death, their father ordered the girl dug up. Finding her oddly well-preserved, and her heart full of fresh blood, he cut out her heart, burned it, and fed the ashes to the boy, who died anyway. What very contagious disease do scientists say was actually killing these people?

5. Despite playing girl-who-cried-witch in the 1996 film adaptation of The Crucible, Winona Ryder is no Puritan. In 2001, she was arrested for shoplifting $5,500 worth of designer clothing from which high-end store? (Contributed by William Boggess.)

6. Some scholars have speculated that the hysteria that culminated in the Salem Witch Trials may have been brought on by contaminants in Salemâ€™s food supply. Specifically, Salemâ€™s stores of rye may have been laced with a fungus that contains large quantities of Lysergic Acid, an analog and precursor for synthesis of LSD. What is this fungus called? (Contributed by William Boggess.)

7. In an effort to turn everyoneâ€™s favorite childhood movie into a breathtakingly boring civics lesson, high school history teachers often teach The Wizard of Oz as an allegory for the economic and political situation of the 1890s. On the off chance that you did not sleep through these lessons, what does the Wicked Witch of the West represent in this interpretation? (Contributed by William Boggess.)

a) The California Gold Rush
b) Marauding groups of bandits on the Southern-Pacific Railroad
c) The money of the old West Coast oil establishment
d) The impending rise of West Coast hip-hop, about a century later

8. Which New England author, cartoonist, and illustrator, accused of being predictably drawn to the gothic, responded, â€œIf you’re doing nonsense it has to be rather awful, because there’d be no point. I’m trying to think if there’s sunny nonsense. Sunny, funny nonsense for children â€“ oh, how boring, boring, boring.â€

9. Which of these authors wrote a story in which the protagonist’s wife makes â€œfrequent allusion to the ancient popular notion [that] all black cats [are] witches in disguiseâ€?

10. Which writer famously defined a Puritan as “someone desperately afraid that somewhere, someone might be having a good time”?

The image shown is “Shot Through,” one more of Michael Aaron Lee’s gorgeous forest paintings.

In which Alex Cox namechecks Borges