Dispatch from Oxford on the eve of the OED anniversary

I’m in Oxford, England (as a guest of Oxford University Press, which has covered travel expenses and lodgings) for the 80th anniversary celebration of the Oxford English Dictionary. The festivities begin tomorrow. My previous post about the trip is here. 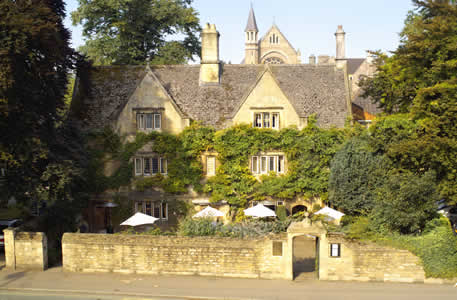 Some Sundays when I was in high school, my dad would drop me off at the UM student library, leaving me to roam the stacks all afternoon.

He believed I spent my time immersed in Dickens, Poe, Conan Doyle, Hemingway, and the Brontés, or in research for English papers, and I did check out those books to read at home later. But in the library itself I mostly searched for pornography — pre-Internet, when you lived in a religious household, you could make do with the sex scenes in Lady Chatterley’s Lover, the art of Aubrey Beardsley, or, really, anything vaguely prurient — and tried in vain to impress the cute librarian by taking notes on random words from the OED.

Like many bookish kids of that era, the more exposure I had to the dictionary, the more I began to fetishize its vast and musty volumes. Soon I was lobbying my parents for the compact three-volume edition that you needed a magnifying glass to read. Over the years they gave me several dictionaries, but never that one.

Now it’s too late. Once the third edition is complete — and if anyone has $895 to spare in this economy, you can buy the entire second-edition set — the OED will cease to exist as a bound book.

In early May Virginia Heffernan wrote a charming and perceptive article — “Lexicographical Longing” — about her reaction on learning that the OED “has already shaken off the shackles of print and said cheerio (‘a parting exclamation of encouragement’) to books! The stab I felt was sharper than nostalgia. It was fear.”

Heffernan acknowledges that it’s been years since she pulled out the magnifying glass and consulted her own compact edition of the dictionary. Over the years she has tended to resort to “the dumb dictionary that came with my Mac operating system. (‘Just this once,’ I tell myself as I do with guilty Wikipedia look-ups.)” But because she’s always known that the print option was available, the idea that an institution like the OED would throw off tradition so thoroughly is somehow destabilizing.

I don’t want to say too much here about the disconnect between readers’ theoretical allegiance to print and actual reliance on electronic delivery of information, because that’s a subject I’d like to discuss in more detail in the months to come, but I’m familiar with the just-this-once bargaining that the dearth of intelligent and comprehensive reference materials on the Internet can lead to. Luckily, the NYPL provides home OED access for borrowers.

I’m sure the tours and the old papers will be fascinating, but the scheduled activities I’m most looking forward to over the next few days revolve around the dictionary’s database.

I don’t post about my day job very often — the occasional tax rant aside, it’s not really relevant to what I do here on the site — but since fleeing the practice of law in 2000 I have worked for a legal publisher that’s a sister company of Westlaw, and I spend weekdays writing, editing, updating, and organizing tax articles and reference materials that used to be print-based but are now available to subscribers only online. (Please don’t stop reading. I promise I won’t use the word “tax” in a post again this week.)

I’m curious and excited to see how an institution like the OED has been thinking about the print-to-web transition. At a minimum, I reckon going electronic has made it easier for the editors to deal with contributions from readers.

Among other things, the materials I’ve been given so far emphasize the importance of consistency in citations.

In the days of OED the editors attempted as much consistency as they could manage in the area of short titling [i.e., quotation references]. But variation was not problematic, as the human reader could usually appreciate which title was intended. In these days of computer retrieval, consistency seems more important, and so the project is in the process of standardizing the tens of thousands of different titles that are cited throughout the text

Today I spent the afternoon wandering the Oxford University campus and visiting the natural history museum, which has the most amazing ceiling, and houses dinosaur skeletons, skulls, and — to my surprise and delight — originals of some of Lewis Carroll’s Alice writings and drawings. Apart from their other shortcomings, the photos are pretty washed-out; I took ’em with my phone. 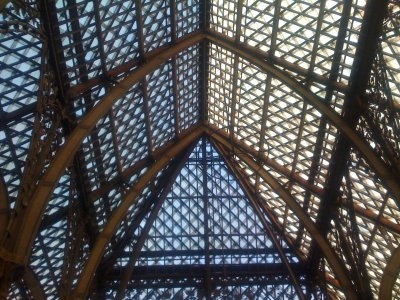 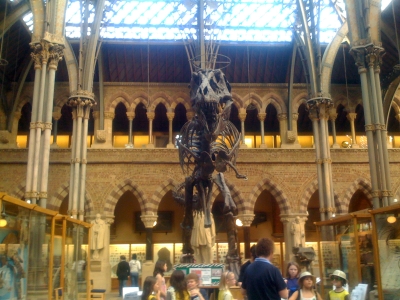 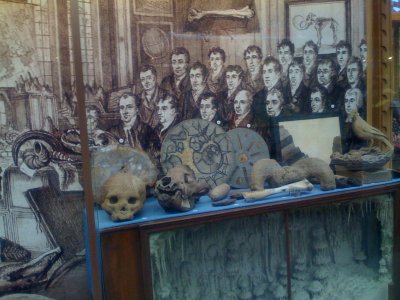 Too bad I won’t have more time to explore Alice in Oxford.

Another unexpected literary discovery: The Old Parsonage Hotel (pictured at top of post), where I’m staying, may once have been home to Oscar Wilde, when he was an undergraduate.

Check back tomorrow (or today, if you’re reading this on Monday) in the late afternoon — evening over here — and I’ll try to post a little bit about the day’s events. Meanwhile, I’ve finished Simon Winchester’s The Professor and the Madman, and poet, email pal, and former guest blogger Susan Ramsey says I should “Scurry over to Blackwell’s for a copy of Caught in the Web of Words! (Along with candy from the tiny little shop across from — Kings? the one Cranmer founded, with the Mercury carp pool — where Alice chatted with the knitting sheep in the scene which feels most like a dream of both books put together.)”

Update: I won’t have time to respond to all readers’ email, but I’ll post selected messages after the jump. Here’s one from Lary Wallace:

Not to be contentious or antagonistic or anything, but isn’t the OED kind of, like… well, not irrelevant and certainly not out-of-date, but hasn’t the field been levelled? Can’t you get perfectly thorough and accurate etymologies now from any decent dictionary? Used to be, the OED was an entity unto itself, but now it seems like just another great dictionary.

As I told Lary, I’m not aware of any with etymological information approaching the OED‘s in terms of historical comprehensiveness — but I’m no expert in lexicography (as I’m sure my lexicographer friend can attest).

He responded, in part:

I’m usually perfectly satisfied with the etymologies provided by American Heritage or something similar. I’m no connoussier, to put it charitably. In fact, just this minute, I went to dictionary.com to look up the exact spelling of connoussier. (I originally spelled it with one _s_. I’m confident they steered me correctly.) For reasons of expediency and convenience, that’s where I get most of my definitions. (It’s also where, if I were feeling less lazy, I’d go to find out if expediency included an element of convenience, and, hence, whether I had just comitted a redundancy or not. They’d probably have just as good an answer as the next dictionary.) It’s just that I’m very skeptical about how much extensively esoterical and sacred knowledge the OED really has. Plus I have an obnoxious insistence on calling my language American, since we haven’t really been speaking English over here since Emerson, Twain, Poe, Whitman, etc…. Anyway, I’m sure it’s a wonderful if superfluous resource, the OED, but its size and expense has made it prohibitively difficult for most people to use, and seems to be of value mostly for the philologist. Now that they’re pulping their paper and going strictly digital, maybe they’ll refine their availability, until everybody, for a pittance or less, can use it. That way, all those pompous people who claim they get their roots from the OED — they’ll finally be telliing some kind of verifiable truth.

And here’s part of what I wrote back:

I have typically relied on dictionaries that less lofty and less comprehensive, too, partly out of convenience, but mostly as as a concession to cost. (Right now I’ll use the OED because it’s free.)

I especially like the OED when I’m trying to discern the furthest reaches of a word’s meaning, and I enjoy tracking the changes through the years. Having all that information is by no means a necessity, but I do think that it enhances my overall understanding of the language.

Heffernan’s comment “the dumb dictionary that came with my Mac operating system” was an unfortunate mistake on her part, since that dictionary is the New Oxford American Dictionary. It’s not perfect, it’s not the OED, and it’s not derived from the OED — though it is influenced by it — but it is a really good dictionary in many ways.

You called her piece charming. I found it to be an ordinary musing on the dictionary of the sort that crosses my email box on a weekly basis. It is the kind of thing usually written by a newspaper journalist who is either short of good ideas on deadline or else is positioning themselves to become their paper’s resident language maven — a job they perceive as easy, since they feel that, as a journalist, they must surely be one of the foremost experts on English. It is an idea that is almost never borne out by the evidence.

For one thing, many etymologies are not fixed facts. There is room for disagreement, especially in the face of new theories or new information. So it behooves anyone interested in etymologies in a serious way to check more than one dictionary or etymological resource. Even better, the truly serious scholar will do their own digging into past uses.

For another thing, although OED does not have a lock on the etymology market, I would look askance at the scholar who has serious need of etymologies and did not consult it. Its etymologies are quite good.

For a third, the American Heritage dictionary is also good on etymologies, but they are often brief and elided in a way that can skip detail that might be important to understanding the history of a word. Further, AHD is short on providing cognates in other languages, a feature of etymologies which I have come to appreciate after spending more time with the etymologies in the Century Dictionary.

Susan Ramsey writes: “An online OED is going to be no good at all for pressing leaves for school projects. Ours still has some between paper towels (and I’m so old that our compact has only two volumes, and so nearsighted that, with my glasses off, I don’t need the magnifying glass.)”

If you’d like to comment on dictionaries — OED or otherwise — email me at maud [at] maudnewton [dot] com.