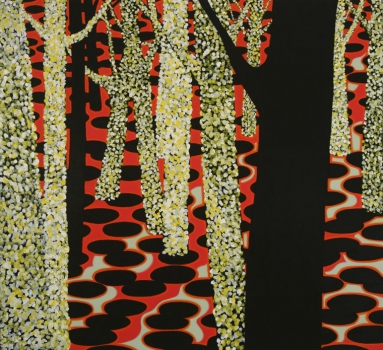 If you’re free on October 22, come out to Housing Works at 7 p.m. for Witches, Demons, and Thieves, a Puritan Halloween celebration with authors Kathleen Kent and Hannah Tinti, and artist Michael Aaron Lee, a friend whose eerie tree paintings (pictured) evoke the cold, dark forest of the soul that Hawthorne’s Young Goodman Brown finds himself drawn into.

As Kent said in a brief Q&A about her novel The Heretic’s Daughter last month:

What a lot people are accustomed to imagining about Puritans, I believe, is a result of the idealized and romanticised influence of the Victorian ideal; the prim and proper settlers of New England who were industrious, God-fearing and righteous. And they were these things, but they were also, according to the local records, contentious and libelous, full of supersitious dread and malicious gossip.

Our event will celebrate the other side of Puritans: The superstition and dread of which Kent speaks, and the sin that roiled below the society’s virtuous surface.

Tinti, who grew up in Salem and says the past always felt very present there, is also drawn to the underside of New England culture. Her finely observed adventure story, The Good Thief, has been compared with the fiction of Dickens and Stevenson. Although it’s set later, in the 19th century, the novel shares themes with Kent’s and Lee’s work.

The Good Thief centers on Ren, an orphan whose missing hand prevents his adoption for many years, but who is finally rescued from his austere orphanage existence by a man who claims to be his brother. Soon the boy is assisting in all manner of small-time — and eventually bigger-time — cons. The author explains (spoilers here):

I was drawn to the moral murkiness of [the] resurrection men. They were doing something terrible — desecrating graves — but with the knowledge of the medical schools and partial acceptance from the law. These thieves did it for the money, but they also inadvertently saved others from dying by providing the test subjects doctors needed to further their science.

(Stay tuned for a Q&A with Tinti.) 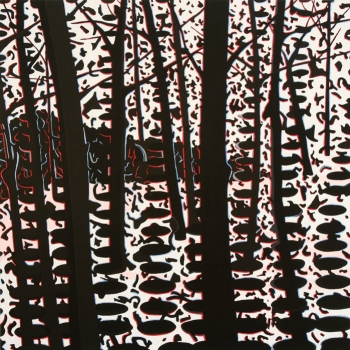 We’ll have pie, brief readings from the authors, a slide show and lecture from Lee, and trivia and prizes. I like to keep events short, so we’re aiming to be done by 8:30.

Wear a costume if you like — Kent has promised to wear something to honor Martha Carrier, her ancestor who was dubbed the Queen of Hell and hanged in the witch trials, and Tinti has been known to get in the spirit of costume events — but there’s no pressure at all.

I haven’t decided whether to dress up. Maybe, in recognition of my childhood Halloweens, I should go as a Jack Chick character. Or a Doré demon. Either way, hope to see you on the 22nd.

Tom Baker on the Old Testament

Dispatch from Oxford on the eve of the OED anniversary