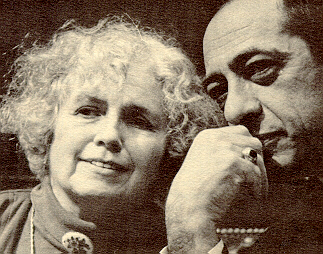 Terrible news: The great Grace Paley, feminist, activist, and until today one of our best living short story writers, has died. She was 84. Leora Skolkin-Smith (whose fiction Paley created an imprint to publish) sent word in email. “The last thing Grace was working on was my own novels,” she says, “and I am dedicating the film of my novel Edges to her. I am just lucky, no one special, I just had that privilege of closeness with her at very end of her long amazing life.”

I met Grace Paley once. Twice, actually. Under the most embarrassing fangirl circumstances.

She was coming to Gainesville for a reading, and I’d been carrying around her book for weeks. The night before the event, she showed up with the local creative writing luminaries at the restaurant where I’d taken my boyfriend for a fancy dinner. Not being gifted in the art of timing, then or now, I hemmed and hawed about whether to go talk to her. We had ordered desserts and their table had started into appetizers before I made up my mind.

I’d had too much wine and, it being the 90s, was wearing a black lycra dress with thigh-high stockings that wouldn’t stay up unless I kept my legs pressed together. So I hobbled rather than walked over to lay on her the same general, uninspired I just love your work so much! that girls at college campuses the United States over must have bombarded her with every night.

The other people at the table studied their plates and napkins. Some of them knew me: I’d taken or dropped out of their classes. It was clear that, the minute I went away, they would turn to her and mutter some apology. Honestly, these hayseed students of ours. Please, have another glass of White Zinfandel.

But Paley smiled. She was wearing sneakers, a t-shirt, and some sort of pendant, and she looked fragile and luminous alongside the tanned Floridians. “Thank you,” she said. “Will I see you at the reading tomorrow?”

The next night, she not only remembered me, but asked if I wrote, and encouraged me to keep at it.

And this wasn’t a fluke. My friend Michelle met Paley a few years ago at a NOW anti-war protest, and she was just as kind, just as encouraging.

Now that I live in New York City, I realize how rare it is for a writer to be so genuinely warm to someone who has nothing to offer but enthusiasm. And with Grace Paley’s death, it’s more rare than ever.