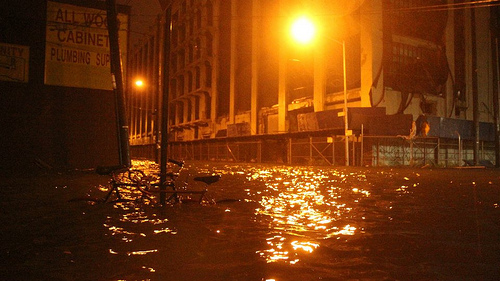 Unlike so many other people in our city, Max and I are fine. Heartbroken, but fine, and fully powered up.

Like everyone else in our situation, I’m looking to volunteer and help out however I can. If I could lift 50 pounds, I’d be signing up for the next possible Red Cross volunteer training class. Instead I’ve signed up with the NYC Public Advocate to assist in South Brooklyn and am waiting to be contacted. I’m also tweeting, of course. And working from home.

That’s a photo of Red Hook flooding, from Sam Sifton’s Twitter feed. It worries me that I haven’t even seen photos of, just for example, the Rockaways or Coney Island, both of which were largely impassable last night, if you can judge from Twitter and FDNY scanner reports.

Updated to say now I have seen the photos of the Breezy Point fire and its aftermath on the Rockaway peninsula. And then there’s the Jersey Shore. Just awful.

Something between a dead language and a hangover