Day in the Life: Hynes’ reading list for Next 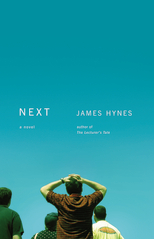 My friend James Hynes’ Next is a departure from his prior novels in many ways, not least in that the action is set in a single day. Writing for the Los Angeles Times, Tod Goldberg says the book, is “wildly inventive, stunning… an essential piece of American literature that is both of its time and ultimately without present compare.” Michael Schaub calls it “a shocking, original masterpiece.” Janet Maslin praises it for the New York Times.

I’m able to enjoy Next at last, now that my Muriel Spark extravaganza is winding down (for me, not for readers of this site), and as I read I am privileged to post Hynes’ characteristically charming and smart day-in-the-life reading list.

There are all sorts of reasons to write a novel — personal, political, religious, economic, or any combination thereof — but sometimes it’s technical. In other words, the writer wants to try out a certain structure or technique that he hasn’t attempted before, just to see if he can bring it off. It’s usually not the only reason, of course, but often it’s the motivating one, the proximate cause of the book. I heard once that Steinbeck wrote Of Mice and Men as a play that was meant to read like a novel, and I’ve heard something similar about Henry James’s The Aspern Papers. In the case of my new novel, Next, I wanted to see if I could write a day-in-the-life novel, a narrative that would be set in a single day, or part of one, and by working backwards and forwards through flashbacks, encompass the entire life of a single character. There are lots of previous examples of this, including, of course, two of the most famous novels ever written. I wish I could say that I’d made a thorough study of the genre, which would make the following list vastly more instructive and rewarding, but the fact is, in the reading I did to psych myself up before and during the writing of Next, I pretty much limited myself to the Big Two famous ones and a couple others. And, in the interest of comprehensiveness, I’ve included in the list several other books that also had a big influence on me, but aren’t actually day-in-the-life novels.

Ulysses, by James Joyce. The Big Kahuna, the great white whale, the Everest of day-in-the-life novels. Like a lot of serious readers, I’d attempted it without success several times over the years, never getting past the first fifty pages or so, but by time I was in the early stages of Next, I told myself that I couldn’t write a day-in-the-life novel and not have read Ulysses. So one summer a few years ago, I took a running start by rereading Dubliners and A Portrait of the Artist as a Young Man (both of which, truth to tell, I still prefer to Ulysses), girded my loins with a copy of Anthony Burgess’ Re Joyce, and started once again to scale the face of Ulysses. This time I made it all the way to the top, and, for the most part, enjoyed myself, though it was often slow going, and I never would have made it without Anthony Burgess. How useful reading Ulysses was to me in the writing of Next, however, is unclear. Ulysses is a big toolkit of a novel, as a brilliant young writer sets off to encompass all of Western culture in one book, set during one day, with only two main characters, all the while showing off, with each new chapter, his vast erudition and his mastery of nearly every literary technique you can think of. Whereas all I wanted to do in Next was encompass one guy’s life, and perhaps a narrow slice of late 20th and early 21st century pop culture and history. In fact, looking back on that summer of reading, Next is probably much more influenced by my rereading of Joyce’s “The Dead,” which has always been my favorite work of his, a story in which a man’s understanding of his life so far is turned upside down on one fateful evening. So, in the end, it wasn’t so much that Ulysses influenced the writing of Next as that writing Next finally got me to finish Ulysses. And I guess that’s something.

Mrs. Dalloway, by Virginia Woolf. This, however, was the motherlode. I don’t want to say that I based Next on Dalloway, but I read it twice during the writing of my book, and I open the book with two epigraphs from Woolf, one from her journals that later reappeared as a scene in Dalloway, and one from Dalloway itself. I didn’t make any rigorous study of the narrative technique or her prose style, but instead just hopeded that whatever I needed to learn would percolate into my brain. When people asked what I was working one, my standard gag was, “It’s a novel about a day in a guy’s life. Kind of like Mrs. Dalloway, only funnier.” I certainly can’t claim that Next is remotely as good as Dalloway, but I did keep my narrative rigorously focused on one person’s consciousness throughout (though Dalloway, of course, shifts between several people’s), and I tried to emulate the narrative’s laserlike focus on the quotidian and the way it could effortlessly shift between the present moment and memory in an instant, sometimes in mid-sentence. In the same way that it finally got me to read Ulysses, I’ll always be grateful that the writing of Next got me to pay very close attention to this remarkably rigorous, unsentimental, but life-affirming book. (One epigraph I considered for Next, by the way, and ended up not using, was another entry from Woolf’s diary: “I meant to write about death, only life came breaking in as usual.”)

Light, by Eva Figes. This is a brilliant little book, which I’ve read three or four times over the years. I didn’t actually return to it while I was writing Next, as it isn’t really a model of what I was trying to do, but it’s certainly one of the best, and smartest, and most beautiful, day-in-the-life novels ever written. It’s about the artist Claude Monet and his family, during one summer’s day in 1900, and it shifts between the points of view of Monet himself at work to that of his wife and children and family servants. Figes may be best known as a feminist theorist, and this is certainly a powerfully, though subtly feminist work, but it captures not only the everyday life of the artist’s household, but also his creative mind at work and the richness (and limits) of his intimate relationships, all in about 120 gorgeously written pages.

Seize the Day and The Adventures of Augie March, by Saul Bellow. Somehow I’d gotten to the age of fifty without having read a word of Saul Bellow’s, so I started with Seize the Day, his account of one crucial day in the life of a young man, Tommy Wilhelm. I enjoyed it in its own right, but mainly what it did was finally get me to read The Adventures of Augie March, which is not a day-in-the-life novel, but is a wonderfully robust and distinctively American bildungsroman. It’s a young man’s book, which Next isn’t, and it’s written in the first person, which Next isn’t, so I’m not sure how much I got from it, but I’d like to think that some of Bellow’s fearlessness in presenting his character warts and all, his lovingly detailed depiction of a small army of secondary characters, and his warm-hearted evocation of a great American city (Chicago) rubbed off a bit on my portrayal of my main character, Kevin, the people he meets, and his experience of the two cities in the book, Ann Arbor and Austin.

Zeno’s Conscience, by Italo Svevo. By now, of course, I’ve wandered off-topic, away from day-in-the-life novels, but this book is one I had been vaguely aware of for years, and deliberately read to see if I might learn something for Next. It’s another high-modernist classic, like Ulysses and Mrs. Dalloway (Joyce, in fact, had a hand in getting it published), one in which a single, self-serving narrator examines his life and loves while revealing more of his true nature than he realizes. He is, in other words, not a particularly pleasant or truthful guy, who can find a ready justification for all sorts of bad behavior — cheating on his wife, treating his mistress badly, playing fast and loose with the family business, etc. At the same time, the novel (like Ulysses, Dalloway, and Augie March) is powerfully evocative of a particular time and place, in this case, the city of Trieste just before World War I.

The Rabbit novels of John Updike. These four novels were as influential to me in the writing of Next as Mrs. Dalloway was, and though none of them is set on a single day, each one focuses pretty narrowly on a few weeks or months in the life of Updike’s greatest character, the former high school basketball star, adulterous husband, indifferent father, and Toyota salesman, Harry “Rabbit” Angstrom. I read the first two books years ago, in my twenties, and thought, in that Oedipal way of obnoxious young writers, that they were beautifully written, that they captured both the texture of everyday life, but that they weren’t really about anything. It wasn’t until I reached the age of fifty and deliberately started reading them again while I was writing Next that I realized that they are indeed very beautifully written, they really do capture both the texture and the mystery of everyday life, and that they are actually about everything. The novels constitute one of the most comprehensive exposures of a single character in literary history, as Rabbit is portrayed as being frightened, lustful, proud, craven, petty, forgiving, insightful, ignorant, sometimes decent, and occasionally heroic, sometimes all on the same page. He’s unlikable for much of the novels, and even contemptible at times, but in the end, you can’t help but end up loving the guy, if only because in spite of everything — age, regret, betrayal, disappointment, resignation — he keeps putting one foot in front of the other. Just like the rest of us, he keeps going despite not knowing what’s coming next, until, of course, at last, in the end, he does.

Sarah Palin’s Planet Earth different from yours, mine

On the viability of book covers in an ebook world