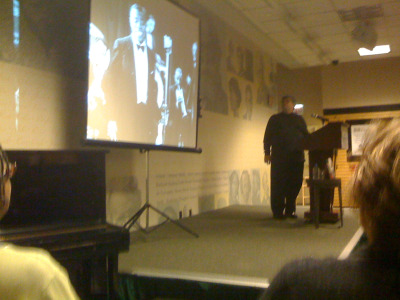 Last night my pal Terry Teachout read from Pops, his smart, engaging, and widely-praised new biography of Louis Armstrong, and showed some footage.

While answering questions afterward, Terry recommended that everyone listen to this week’s New Yorker podcast, which includes an audio clip of Armstrong trying to cajole his wife into bed in the wee hours. His horn has to come first, Armstrong says, and now it’s time for her to help keep his heart pumping.

She notices that the recorder is running and tells him to turn the tape off and “erase off some of that shit.” (Armstrong refused, apparently. The recording, he said, was for posterity. And now here we are, listening just like he knew we would.)

On the way out, my friend Tracy and I ran into critic Garnette Cadogan and jazz singer Mary Foster Conklin, and we all rode the 1 train downtown together.

Garnette and I spent most of the journey commiserating about the cold weather and short days, and about writing. He’s been working on a book about Bob Marley, and you know what I’m doing; we agreed that it’s important for writers to be able to delude themselves at the start of a project about how long it’s going to take, which is usually about ten times longer than expected.

I’m pretty sure Terry, who toiled on his biography of H.L. Mencken for a decade, would agree. He speaks at the Los Angeles Public Library tonight.

No one will ever again take being funny quite this seriously