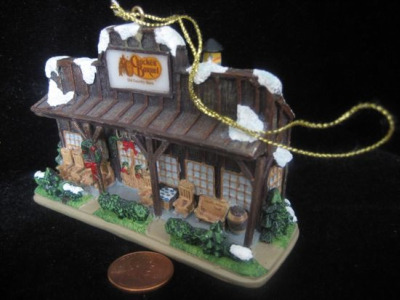 Joshua Glenn and Rob Walker created the Significant Objects project earlier this year to prove the theory that a writer could invest an otherwise worthless object with value by making up a story about it.

That’s my object, above, and you can find out its (invented) provenance at the Significant Objects site. A preview:

This astonishing “Cracker Barrel” artifact appears to be a souvenir of modern vintage, representing a down-home North American restaurant-and-country-store chain that upholds Christian values by refusing to hire gay people. In fact, the object dates to the Bronze Age and was unearthed last week in the vicinity of the Dead Sea, on what is believed by several prominent archaeologists to be the site of the ancient cities of Sodom and Gomorrah.

The rest is here, and at Ebay. By default, proceeds from the sale go to the author, but I’ll send whatever this object garners to Girls Write Now, a nonprofit organization I support (and serve on the board of).

Outrage over the intrusion versus burning curiosity