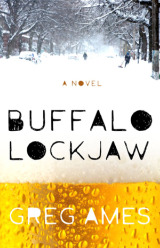 I’ve praised Greg Ames’ short story “Physical Discipline” so many times, with so little specificity, it’s become embarrassing. Even more embarrassing: the fact that his first novel, Buffalo Lockjaw is out, and I have yet to read it (unlike Aimee Bender and Sam Lipsyte, whose quotes appear on the back cover).

Below Hogan talks briefly with Ames about, among other things, Buffalo, Iris Murdoch, and oral histories.

Greg Ames’s Buffalo Lockjaw is an emotionally riveting story — a young man goes home for a holiday weekend, wrestling with his conscience about whether to perform an “assisted suicide” on his mother, whose dementia is already in a severely advanced state — but the author doesn’t jack up the drama with artificial tension. His protagonist, James, muddles his way through the situation the way a real twenty-something male fumbling towards maturity might be expected to; when the family can’t dance around the subject any longer, what happens isn’t TV-movie bombast (raised voices, wild gestures, slammed doors) but a series of quiet, awkward conversations… after which James retreats right back into himself.

All of this takes place in a Buffalo where the landscape and the residents, like the Icelandic capital in the film 101 ReykjavÃ­k, become an extension of the main character’s psychological state while still maintaining their own vibrancy.

You’ve been living in New York City for about a decade now, but in addition to this novel, several of your stories have been set in Buffalo. How has the distance of time and space affected your memories and your imagined version of the city?

I still write about Buffalo, I think, because I’m lazy and don’t want to do any research. It’s my hometown and I know the streets, but I think that “Buffalo” is just a word that comforts me. I’m never trying to be factually accurate. To be honest, I don’t really care much about place in fiction. A city name is just a word to me. I know that’s odd. But I never read a novel to “see” New York City or Paris or London. As a reader, I’m far more interested in character than place. I am only speaking for myself here. Like, say, when I read James Agee’s Death in the Family, there’s that gorgeous opening about Knoxville, Tennessee. It’s great, great writing, but personally I don’t care any more for Knoxville than I care for Chattanooga, Tennessee, or Boulder, Colorado. As a reader, I mean.

Agee’s sentences are so poetic and perfect and true — you can just eat the language — and in some ways I think the setting, the place, is just an excuse for Agee to riff and show off his skills. The word “Knoxville” is a piñata that the writer smashes open and all the goodies fall out. I don’t even know what I’m talking about anymore, so I’m going to stop there.

At one point, James tells us that “Iris Murdoch’s the greatest writer in the world when you’re in the mood.” When he says that, he isn’t actually in the mood, but can you tell us about when you were in the right place to make that discovery?

Maybe he’s overstating the case a little, but I do think Murdoch’s a much better writer than she’s often given credit for. I mean, Under the Net is a delight, and even though she never does that again, never just lets you off the hook with a pure entertainment, she’s definitely a much more playful writer than most critics allow. She’s dark, brainy and playful, everything I want out of a writer. But James says he is not in the mood to read her at that moment because timing can be all-important when approaching a book. In my own life I can think of a number of times when I tried to read a novel and couldn’t get into it, and then years later I came back to it and found an entirely different book waiting for me. The first time that happened was with A Confederacy of Dunces. Everybody told me it was hilarious and perfect for me. Twice I tried to read it and — nothing. It just didn’t do it for me. I tried a third time a few years ago and it blew me away. I was finally ready for it. Recently I had the same experience with Nathanael West’s Miss Lonelyhearts. I couldn’t penetrate it the first time I tried. It kept evicting me. Now I think it’s one of the tightest, most heartbreaking and perfect books I’ve read.

Anyway,I feel no guilt in abandoning a book, even one that’s considered great. The book is fine; the problem is I’m not ready for it. I understand this. And rather than soldier through something without joy, I dump it and pick up another book. I won’t read something out of a sense of duty or obligation. There’s too much at stake. I don’t have as much free time anymore. If I’m slogging my way through some piece of shit because I’m “supposed” to, I’m not doing anybody any favors. So I put it down and move on. There is always another book calling my name. After all, the abandoned book will survive with or without me; it’s not going anywhere. Unfortunately, I can’t say the same for myself. I’m in a greater hurry. Every time I open a novel I hope it will rip the top of my head off. I want to become ecstatic.

Where do the oral histories that James listens to on his car stereo fit in the timeline of Buffalo Lockjaw’s development? And how many more “tapes” are there that didn’t make it into the final version of the novel?

I inserted the oral histories after my agent agreed to represent the novel. I felt that Buffalo Lockjaw was somehow incomplete, and I was excited when I came up with that idea. I think there are a few extra “tapes,” but I didn’t like them as much as the ones you see in the book.

Oral histories are so much fun to read. Studs Terkel’s Working and Legs McNeil’s Please Kill Me are two books that I re-read with pleasure. You get a sense of a person very quickly in an oral history. I wanted to try to do that with fictional characters. I had never seen a novel with an oral history component, so I was under the impression that I was doing something unique, even though I know that nothing is unique. Buffalo Lockjaw can get a little heavy at times, if you consider musing on matricide heavy, so I thought of the oral histories as palate cleansers, like: Here’s a little sorbet for you, reader.

In a recent interview, you discuss how novel writing has “taken over my imagination in the same way the short story did for much of my 20s and early 30s.” How are things progressing in that vein these days?

Pretty good. I’m writing the second novel now, and I think it’s the best work I’ve ever done. I mean, it’s kicking my ass and there’s a part of it that I still can’t solve, but I’ve never had so much fun writing anything before. I might not end up where I think I want to go, but I am heading in the right direction. Anyway, I’m lucky that I even get to try to do this. I’ve always wanted to write books and it’s happening for me. I appreciate my good fortune. Every morning I know exactly what will bring me joy. That’s not bad.