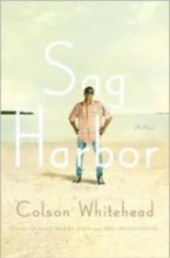 At one of our first dinners — or was it during a marathon phone conversation? — I discovered that Marie Mockett shares my admiration for Colson Whitehead’s work.

I figured readers of this site would enjoy someone else’s perspective on his writing for a change, so I invited her to interview the author (who’s become a friend) about his new novel, Sag Harbor.

Her thoughts, and the discussion with Whitehead, are below.

Colson Whitehead can subvert expectations with a single sentence. When Maud asked me to interview him in conjunction with the publication of his marvelous new book, Sag Harbor, I was excited; I’ve been a fan since I stayed up all night devouring The Intuitionist years ago. But I also prepared myself for the unexpected (as you will understand once you click on the Silence of the Lambs Lego opera link he sent to me).

With Sag Harbor, Whitehead leaves the surreal and abstract worlds of The Intuitionist and Apex Hides the Hurt for a vividly captured summer of 1985 on the very grounded Long Island. Sag Harbor is hysterically funny, as Whitehead’s novels have always been, with plenty of observations about popular culture and race, and scathing social commentary. Benji (or Ben, as he would prefer to be called) is an upper-middle class African American fifteen year old caught between multiple worlds, including the delicate boundary between childhood and adulthood. He’s old enough to wonder about his sister’s absence from family gatherings, but young enough to make sure he has mastered the lingo of his peers. “You could also preface things with a throat-clearing ‘You fuckin’ — as in ‘You fuckin’ Cha-Ka from Land of the Lost-lookin’ motherfucker,’ directed at Bobby, for example, who had light brown skin, light brown hair and indeed shared these characteristics with the hominid sidekick on the Saturday morning adventure show Land of the Lost.”

With each page of Sag Harbor, I marveled over his virtuosic prose, and deadly wit. But Whitehead is a serious artist, and the story is not purely a light and airy read. While he has always demonstrated compassion for his oftentimes isolated characters, Sag Harbor is infused with the anxiety of adolescence and a new warmth wrought from nostalgia.

An Esquire review of Sag Harbor contained this line about your work: “He seems post-conflicted, awfully comfy in whatever skin he’s in.” Is the adult Benji, looking back on his teenage years, post-conflicted? How do you feel about people wanting you to stand as an author who works out conflict for them? (Note: the reviewer did say he is jealous of you).

The Esquire writer was a bit weird, since he seemed to be reviewing his idea of my persona, as opposed to the book. It was a bit too “it puts the lotion on itself for me.” (Have you seen this, by the way?) I’m the Coolest Writer in America? — I spend 95 percent of my time in my house padding around in pajamas covered in dried minestrone. (The Coolest Writer in America is obviously Mr. Freeze, DC Comics villain and author of the memoir Early On I Made A Decision To Incorporate A Cold Motif Into My Crime Sprees: A Life). Of course Benji is conflicted, confused, disassociating, plodding along. To confuse his adult self’s ordering of his teenage self’s experience with “post-conflicted” is a bit dense.


In rereading your other novels, I was reminded once more of how deftly you handle the subject of race. The Intuitionist can be enjoyed as a slightly disturbing mystery with a sly sense of humor; it can also be read as an allegory. Apex Hides the Hurt has this fascinating abstract quality to it and is terrifically funny; it is also, as you have said, about race. Were you consciously aware while writing that your novels work on a variety of levels, and did you intend for them to work this way?

I can’t say if how I present my pet preoccupations — race, the City, pop culture, waffle cones — make it easier for people to relate to, or inhabit, my stories. Generally the metaphors evolve over the course of the planning and writing of the book. I didn’t know I was going to be able to tease out so much about race and architecture when I started the Intuitionist — the symbols and rhetoric revealed themselves the further I got into the book. And once you figure out a new aspect, that leads you to another, and so on. As for the allegory/fabulist tale/parable part — I grew up on comics and sci-fi, so the tweaked/heightened/absurdified/mythologized rendering of reality is part of the toolkit from way back.

In a New York Magazine interview, conducted when you were still drafting Sag Harbor, you are quoted as saying: “I’m still trying to figure out how to write about stuff that’s more directly from my experience.” Is this something that you want to be able to do or feel you should do, and if so, why?

So long ago. Looking back at my notes, I was only 4 — a whopping 4 — pages into the book, so I’d say yes, I was definitely still figuring out how Sag Harbor was going to work. Do you have to figure out how to use stuff that comes directly from your life? No. If you want to write GilagaTech: The Robot Chronicles, a 7 volume (projected) series about a race of warrior robots and the spunky human child who leads them, and there’s nothing from your everyday in it, go for it. It depends on what you’re working on. For this book, definitely — I had a set of disorganized life experiences, and needed to discover how to shape, spindle, and mutilate them into an interesting story. Drab piece of cheap bond manipulated into gorgeous origami crane, that’s my motto.

The parents in Sag Harbor make brief but pretty memorable appearances. Benji’s father comes across as particularly forbidding. How did you go about shaping the father character, and did you feel sympathy for him? Do you empathize more with the father’s background than Benji is able to?

I have a hard time figuring out how much empathy Benji has for his father and mother, as I see him as in so much denial about the larger family forces around him. I didn’t want to him to process; it takes years and years to understand what’s going on around us in our houses, and I wanted to depict that. (Hence no tidy resolution on Labor Day; life is not that neat.) Did I feel sympathy for the father? At the end of the day, they’re constructs. When I read back over stuff I’ve written, I have a more sentimental response, based on the day to day progress: “I remember when I figured out the sister’s cameo, I went out and had a good steak”; “God it was hot when I wrote the Afro scene, I was listening to Jay Reatard and sweating like a pig.”

Are you surprised by the ways people from all backgrounds see themselves in your fiction and respond to your characters, and how does it make you feel? Or are you used to this by now?

I’d have a very narrow audience if it consisted of skinny black guys from Manhattan; not that we don’t buy books. We do. Occasionally. It makes me very happy that anyone wants to read my books, and it’s kind of the point to make that big bad Other of everyone else understand what you’re trying to do. I do find it a bit strange when people say, “I’m a 55 year old lady lumberjack and I could relate to your story.” Do you only read books by 55 year old lady lumberjacks? Why are you so surprised?

You’ve mentioned that prior to Sag Harbor, your protagonists have been writers in one form or another. In Apex Hides the Hurt, you describe the nameless nomenclature consultant’s “process.”

He pictured it like this: The door opened up on a magnificent and secret landscape. His interior. He clambered over rocks and mountain ranges composed of odd and alien minerals, he stepped around strange flora, saplings that curtsied eccentrically, low shrubs that extended bizarre fronds. This unreckoned land of his possessed colors he had never seen before.

This is the sort of passage that makes me feel that you have tremendous empathy for your characters, even as some critics have called you “detached.” As for the passage above; is writing ever this emotional and acid-trip-like for you?

There, I’m trying to describe what writing is like, as well as in the opening Inspection/Bribery scene in The Intuitionist, and in Lucien’s bizarre PR meditations in John Henry Days. But you’re using the thing to describe the thing itself — which is probably very complicated according to some school of philosophy or critical discourse that is over my head and anyway I’m too old for new tricks — so you can only fail. Is Benji a writer? I don’t know.

I have this impression that your mind works very quickly, and that perfect sentences and deadly phrases just roll out of you fully formed. Your Twitter feed, for example, seems effortless and precise. How much tinkering do you have to do on a sentence level as you edit, or do lines and observations like this come out of you in perfect shape?

You know — sometimes they come out right the first time, but usually they take years to get right, which is why it’s good that novels take years to write. You have some time to work on them. If there’s something I don’t understand how to do — fix a sentence or get a character’s voice down — I’ll wait. Eventually I’ll get it — I have to, because I can’t hand the book in until I do. “He stood” generally comes out perfect. “He leapt to his feet and ejaculated, ‘We’ll do it for Joey!'” can take years before it is transformed into “He stood.”

Has having a child changed your writing habits?

Things were fine until she learned to walk. Then she started barging in with “Daddy!” and that’s so beautiful that it’s hard to pretend that getting back to work is important. But I didn’t work for two years, and I had to get an office. Now that she’s in school, I have the house to myself again. If only I had something to work on.