A queer idea of me: Poe regrets drunkenness 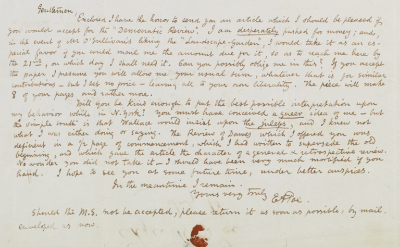 In 1842, Edgar Allan Poe got so drunk on mint juleps while visiting New York that he sent a letter apologizing to publishers J. and H.G. Langley.

Will you be so kind enough to put the best possible interpretation upon my behavior while in N-York? You must have conceived a queer idea of me — but the simple truth is that Wallace would insist upon the juleps, and I knew not what I was either doing or saying.

The apology is buried in the second paragraph of the missive, which is really a submissions letter. Poe encloses with the correspondence a “Landscape Garden” article that he hopes the publishers (of Democratic Review) will buy, and notes that he is “desperately pushed for money.” (The piece was rejected but appeared later that year in Ladies’ Companion.) It’s the underlining that really gets me.

The University of Virginia has acquired the letter, which until last week had been in private hands, and will include it in “From Out That Shadow: The Life and Legacy of Edgar Allan Poe,” an exhibition celebrating the bicentennial of the author’s birth.

See UVa’s press release for a larger scan of the julep letter. Other selections from Poe’s correspondence are also available online.

The university did not reveal how much it paid, but presumably the price was considerably higher than it would have been in 1914, when it was possible to buy some of Poe’s letters for a couple hundred bucks.