How would you expect Arthur Conan Doyle to sound? 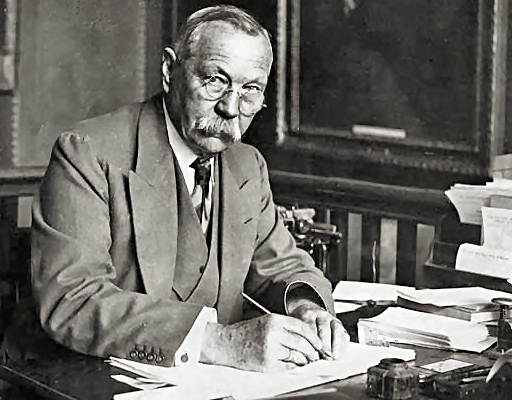 Last week my old friend Rick and I read the first four sentences of some of our favorite novels over the phone and made the other person grade them blind.

Although the scores were in before the source of each excerpt was revealed, inevitably a few books were recognizable right away. There’s no mistaking the start of Dead Souls for anything else. And while The Razor’s Edge was harder for me to identify, the voice was unmistakably Maugham’s. (See previously No more cakes and ale: Maugham v. the literati.)

Listening all at once to an amazing new set of rare author recordings from the British Library Archives this week, I’ve been struck by the disconnect between some writers’ speaking voices and their written ones.

Maugham’s droll delivery is more or less what you’d expect (maybe because I’ve heard a speech of his before?) but Arthur Conan Doyle’s (pictured) chirpy tone seems all wrong. As Andrew O’Hagan observed in the London Review of Books:

the British [compilation] gets off to a startling beginning by bodying forth the ghostly voice of Arthur Conan Doyle, whom one expects to sound like Basil Rathbone. In actual fact he sounds like Gordon Brown. It’s somehow easy to forget that Conan Doyle was born in Edinburgh, and his voice, recorded in 1930, is here filled with lilting plangencies about the age of materialism and the fact that death is not the end. He was right about that, about death not being the end. Last week in Liverpool I found myself broadcasting with a woman who wants to create a social networking website for the dead.

Despite Auden’s thing about memorable speech, a strong literary style bears the same relation to everyday conversation that Matisse bears to the demands of home decoration. That’s to say, they feel friendly to one another, but where they might share content they don’t share form. That is why the conversation of writers can often seem so unbearably silly in the light of our expectations. We think Virginia Woolf should sound like her style, but she doesn’t: in her British Library recording (the only one in existence), she sounds like a person imprisoned by her sensibility and her class as opposed to someone who floats somewhere above it. Woolf was recorded in 1937 and we listen for the sound of her prose and find instead a person fast in the grip of banality.

In similar fashion, E.M. Forster’s voice makes him smaller. The problem is that he sounds like merely one thing, which is fine in general but it can make a novelist sound like a complete stranger to his facility. Some of the recordings take the form of interviews, and the presenters don’t make matters any easier; John Lehmann, for example, speaks to Aldous Huxley as if he were questioning him with a view to offering him something at the Foreign Office. Which just goes to show that broadcasting vices existed long before the days of Russell Brand and Jonathan Ross. None of the English writers on the British Library CD has a regional accent: Joe Orton doesn’t sound like a boy from Leicester, but like someone from Rada, which claimed only a few years of his life but all of his voice.

And returning for a minute to the subject of how recognizable authors’ written voices are, I recently came across a great Elizabeth Jane Howard anecdote that touches on the subject.

Anything writers ever say about writing can only apply to them, as you have to find your own way of doing things. And it’s a strange business. Years ago Kingsley [Amis] and I tried to write a section of each other’s novel. He’d usually write quite quickly with lots of laughing at his own jokes. I’d write slowly and would bite my nails a lot. But when we swapped over, I started laughing and he started biting his nails.