2008 novels for the iPhone just the tip of the Iceberg 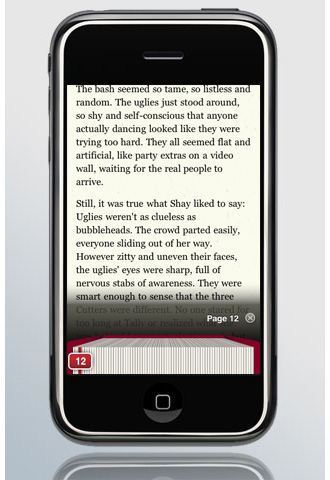 The minute you meet ScrollMotion co-founder Josh Koppel, you know you’re in the company of a visionary. Intense, smart, and unpretentious — quick-thinking and quick-talking — Koppel is a writer whose unconventional memoir appeared just after September 11, 2001, and in short order wound up in a landfill.

The experience would have left many authors furious and devastated, but it got Koppel thinking.

He was convinced that the odd size and and strange format of the volume, which seemed out of place on traditional bookshelves and booksellers’ tables, were part of what sunk it. In fact, he realized, it felt like he’d written a book for a medium that didn’t exist yet.

On coming to this conclusion, most aspiring writers would have slunk off to a desk job, pulled out a razor, or at least resolved to write more traditionally. But Koppel’s been experimenting with ways of telling stories by hacking existing media ever since. And when one door has slammed shut, he’s shrugged his shoulders, moved down the hall, and pushed his way through a different one.

On the wall of his office hangs an ancient Newton; on his desk a Google Phone shares space with a Kindle. He is familiar with and conversant in the capabilities of e-paper. But Koppell’s devices of choice, since he hacked the first video-capable iPod, are the iPhone and iPod Touch.

It is for these that ScrollMotion, under the guidance of novelist and partner Calvin Baker, has developed Iceberg. The new reader technology makes each book easy to search and annotate, and allows each title to be sold separately, wrapped in the iTunes DRM. As Wired’s Chris Snyder observes, Iceberg in effect puts Apple directly into the e-book business by allowing the company to pick up a percentage of each sale. â€œ’This is a business model that works on their business model,’â€ Koppel has said.

Houghton Mifflin Harcourt, Penguin, Random House, Simon & Schuster, and Hachette are all working with Iceberg to make newer titles available. Scott Westerfeld’s Extras, a favorite of my stepdaughter’s, is scheduled to appear at the Apps store tonight.

All of the Iceberg books maintain the pagination of the print originals, which means they require both scrolling and page-turning, a combination that makes them — at least so far — a little more complicated to use than the ones available for the Classics app.*

But they’re attractive, uncluttered, and surprisingly versatile. The type has grow-and-shrink capability, just like web pages on the iPhone’s Safari browser, and you can read vertically or horizontally. And unlike any other iPhone applications available, each title has full search functionality, a note-taking feature, and a “Book Skim” option that enables you to locate notes visually as well as by page number.

To get some sense of how Book Skim and note-taking work, take a look at the image at the top of this post (larger, cleaner version here). Imagine running your finger along the pages that are pictured at the bottom as if they’re jutting out from a bound book. Right now 12 is selected, but you could as easily select 157 or 285. If you’d made notes on one of those pages, it would appear brown, rather than white or maroon, and you could select it by touch. And when you want to read rather than search, just dismiss the pages-and-binding image, and you’re left with clean text on a page.

Right now I’m testing a novel I’ve already read and loved. After sitting with it on the train and at home tonight, and picking it up again in the morning, I’ll say a little more about Iceberg.

Meanwhile, three things. First, the only potential negative I see so far is pricing. Obviously books are expensive to acquire, edit, and publish, but when a title goes electronic, you’d think… well, more on this soon.

Second, if you’re an author who hopes this electronic thing is a fly-by-night trend, or whose publisher isn’t on board with ebooks — isn’t, in fact, selling your book for download in as many formats as possible — consider that Stanza has had more than 600,000 unique users this year alone. Obviously, given these numbers and sales for the Kindle, it’s ridiculous to keep saying that no one reads books anymore. Yet for years we’ve been stuck in a market where 10,000 sales for a literary novel is better than average. Ask yourself if you want this half-million-plus-and-growing pool of readers to have access to your work in what may be their preferred format. And after that, maybe ask your publisher.

Finally, looking for a job? Unlike just about every other company on these shores, except maybe bankruptcy firms, ScrollMotion is hiring.

Previously: Book apps for the iPhone keep getting better.

* I’ve nearly finished reading Robinson Crusoe — Daniel Defoe’s 1719 novel about a sailor who flees a comfortable existence in England and winds up shipwrecked and stripped of all comforts — on the iPhone Classics app. My friend GMB wondered if the irony was intentional. It wasn’t.

Update: David Rothman of Teleread argues that the largest potential problem with Iceberg is that it uses iTunes’ proprietary format, thus forcing prices to remain unnaturally high, and making novels a rarified and expensive product not available to all. “[C]onnect the dots,” he urges me.

So, allow me clarify, in case this was not obvious from what I have said previously and in this very post about reading on and making books available electronically. I would like to see titles offered in a variety of formats — for the iPhone (Iceberg, Classics, Stanza, eReader), for the Kindle (although I personally do not want one), for the Wii, and for any other device using any platform that appeals to readers and secures copyrighted materials sufficiently to prevent mass copyright violation. What I like about reader tools for iPhone, Wii, and other handhelds is that they are not expensive book-centric devices, but work on existing multi-purpose machines.

I’m also, for what it’s worth, very much in favor of the Google Books database, which is searchable online, but shows only every few pages of a new text, allowing potential readers to get a taste before deciding to buy. And with its new magazines project, I suspect that Google eventually will be competing with Lexis-Nexis and other paid information aggregators. Whether the company will get directly into eBooks, I don’t know, but with Stanza possibly targeting its Android phone, I wouldn’t be surprised.

I've been delighted that readers have found my end

May sunset after a rainy weekend, on Lenape land.