A few weeks ago, I put out a call for your worst holiday experiences. My friend Brent of Titivil disqualified himself because his entry (below) was longer than I’d specified. He wins anyway. It’s a moving, atmospheric story, and also, he’s the only one who entered. 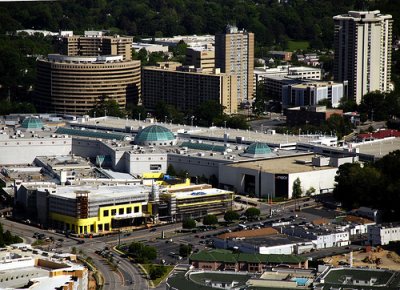 Terrible holiday story? It was Thanksgiving Day two years ago. I was a year and a half into my marriage, and eight or nine of those months my wife had spent an hour and a half away from me, with her mom and her only sibling, a sister. The sister had been diagnosed with glioblastoma multiforme, which is a kind of brain cancer you don’t beat. My wife was staying there to take care of the sister in between surgeries. I’d been called down to lend a hand. So the mood was, well you’d think it was grim, and it was, in a way, but there’s a lot more to it when you’re going down that particular tunnel.

We were staying in a Holiday Inn in Towson, Maryland. I’m pretty sure that people live in Towson, but the town seemed to define itself mostly by strip mall/actual mall density — national chains metastasizing everywhere, six-lane non-Interstates, and crowded developments behind every rise. I did find a respectable diner, a fishmonger with good crabcakes and a couple pit beef shacks, but otherwise, life consisted of a generic motel room, with a limp cable package and slow DSL, and the parking lot and the wooded gully next to it, for walking the little dog, a year-old Boston Terrier. The sister was stationed in the rehab wing of a second-tier hospital after what ended up being her last brain surgery. Johns Hopkins rented out space there, but it was no Johns Hopkins. I watched the little dog while everyone else trucked off to the hospital, and I tried to be good company for my wife.

We were usually at Johns Hopkins, because the university had a kick-ass neurology department that pretty much adopted the sister and took her care personal. (Actually, I’m unsure of the relationship between the university and the neurology dept. Unlicensed metonymy? Synecdoche? I forget.) When she was treated there, we stayed in Mount Vernon, a museum and coffee shop neighborhood downtown which was good for killing time, and feeding the troups. There was a big park across the street for walking the dog. The location improved everyone’s spirits. But the recovery from surgery was taking a little long, so the sister was transferred up to Good Samaritan, and we moved up to Towson, to be closer. I had been there for the move, and then went back to New York to work for a few days. I returned for the week of Thanksgiving. It was decided that my wife and her family would spend the entire day at the hospital, and not leave for meals. I would stay at the hotel, with the little dog. All day long.

So, Thanksgiving, normally my favorite holiday: alone (with little dog), in a crappy hotel room, in a town I did not want to be in.

It did not start as dreary as all that. I had a friend in Baltimore, a bartender type, who was meeting his pals at 7 a.m. to play a boozy game of touch football. I got up early, left the wife and the little dog sleeping, drove down to Fells Point, had a few beers before the parades started and got back with coffee for the sleepers. That was fun, for what it was. My buddy and his pals were tolerant of the only anecdotes I could muster, which were about oncologists and symptoms and such.

I drove the wife out to the hospital by noon â€“ the rest of the family had already driven themselves there. Me and the little dog watched her walk up the sidewalk to the main entrance of Good Samaritan. We weren’t thinking anything dramatic, like you’d like to embellish. It was a routine, and Thanksgiving was just another footnote.

On the way back, the little dog and I cruised. We were tasked with providing Thanksgiving Dinner for the troops at the hospital from available open restaurants, and, even though Indian food had been requested, I thought one of the pit-beef shacks might be able to slip me actual turkey. They could, but were not open â€“ we had some later that weekend, and it was nothing to write about â€“ so we went back, to spend the day in the room.

I could’ve watched football games, I suppose, but I didn’t feel like it. I read (my third reread of Peter Straub’s “Ghost Story”, my journal shows), dozed lightly. Walked the little dog a couple of times. Around five, I called my family and the friends I traditionally spent Thanksgiving Day with. Oddly, that was the heartbreaker. It was one thing to be living a shadow life, and another to pretend like you’re not to your loved ones. I managed to keep it together until I got off the phone.

Did I mention that the hotel bar was closed? Holiday Inn obviously hates stranded holiday travelers.

After dark I started calling around for an Indian restaurant that was open. That was a bit of a fright for a second, as the only one I was finding was way down past the Inner Harbor. Finally I found one in Towson proper, placed the order, leashed the little dog and got going. It was surface streets all the way there. I was the only one on the roads, for miles at a time. The little dog stared out the window at the darkened Starbucks and then the next darkened Starbucks.

I got the food, all two and a half bags of it, birddogged my way to the hospital, dropped it off, kissed my wife and headed back to maybe watch a little football.

Around a quarter of ten I realized that not only had I not eaten any turkey, I had not eaten since a donut from 7-11 at the crack of dawn. And all the food was at the hospital. So, I waited for the gang to come back, and hoped that there would be leftovers, which there were.

It does seem like it should be about the worst holiday ever, butâ€¦ there was a serenity on that day that I miss a little bit. A resignation, and also a digging in of the heels. Sometimes you just do what you’re supposed to, and your only reward may be feeling useful, but that’s not so bad as rewards go.

The sister passed away two months and a week later, at the age of twenty-eight, fighting until she stopped. Me, my wife, and our little dog miss her very much.