Lary Wallace on the death of John Leonard 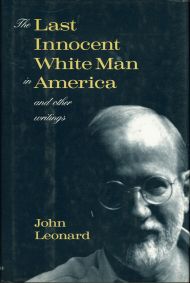 “When I start to read John Leonard,” said Kurt Vonnegut, “it is as though I, while simply looking for the men’s room, blundered into a lecture by the smartest man who ever lived.”

Leonard died last week, the day after casting his vote for Obama, and his absence is mourned far and wide in the literary world. (Laura Miller’s remembrance is a good place to start.)

Below Lary Wallace offers his valediction.

John Leonard refused to write in the critic’s standard default voice: detached and smugly ironic. He wasn’t afraid to be passionate about books, especially novels, novels being something that he stopped writing when, by his own admission, “I realized that the novels I was reviewing were better than the ones I was writing.” He could engage in that kind of self-deprecation, secure enough in his own talents as a stylist of dazzling originality to praise the performances of those who had chosen to play a different sport. No one could capture the essence of a good novel better than Leonard — the more metafictionally post-modern, the better.

This would be the place to choose an example, but it’s a choice that’s difficult. Here’s one, on E.L. Doctorow from the New York Review of Books, in 2004:

It can’t be that he’s furious because he wants attention, although he deserves more, as a writer who has quietly amassed a shelf of books that are as serious-minded as they are beautifully crafted; who is at once a radical historian, a cultural anthropologist, a troubadour, a private eye, and a cost-benefit analyst of assimilation and upward mobility in the great American multiculture, as well as the chronicler of the death of fathers, the romance of money, and the higher ‘latitudes and longitudes of gangsterdom’; who has put on more narrative glad rags and jet-propelled pulp-fiction sneakers than a CondÃ© Nast cafeteria — western, sci-fi, gothic, gangster, ghost, fairy tale and fable, historical or philosophical romance — sort of like Melville’s Confidence Man; and who can’t stop going to the movies.

This is the kind of run-on exuberance that James Wood, in a bit of meta-criticism, once referred to as “John Leonarditis.” Leonard has also been criticized for being too much of an enthusiast, someone who was always too shy with the knife’s blade. It’s true that Leonard was much better at testifying his love than proclaiming his hate, but he wasn’t afraid to let even his favorite novelists — up to and including Salmon Rushdie–know when they’d gone wrong. Yet excoriating failures obviously wasn’t something that he relished; it wasn’t what he’d gotten in the game to do. All he wanted was to read beautiful sentences in order to write them, and it was William F. Buckley, of all people, who first hired this unrepentant liberal, to spike up the letters column in National Review. After that, more suitable venues opened up — at the New York Times, The Nation, the New York Review of Books, New York, Harper’s, and many (maybe a few too many) other publications. But Leonard never let his voice drop out of its register of sustained intensity, as if letting the propeller stop would mean falling from the sky. He wrote that way first as an alcoholic, in the 1960s and ’70s, and he continued writing that way, in spite of his worst fears, after he quit drinking on his doctor’s stern and urgent advice. Getting sober saved his life, at least for a while.

Which is why it’s so sad to see him go now, from lung cancer at the age of 69, and at a time when America is obviously ready to embrace the values of cooperation and tolerance and free expression that Leonard always cherished. He bore eloquent witness to the first New Frontier and its failures, and he would have brought equal eloquence to bear on this new New Frontier, while not ignoring its failures, whatever they turn out to be. It’s in heralding its successes, though, that he would have achieved true transcendence. That was the muse most worth answering, and it’s not his fault that it wasn’t available all the time.

OED’s word of the year