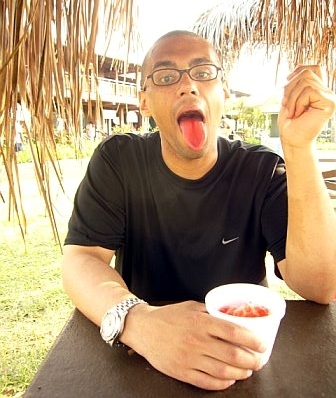 By now everyone knows that the Obama cartoon on the cover of the current New Yorker has ignited a firestorm. I’ve tended to write the thing off as failed satire of the kind that proliferates nowadays: unfocused, simultaneously predictable and overreaching, ultimately resulting in no point being made — except, of course, that the creator is terribly knowing and clever (and smug).

But your mileage may vary, and my friend Victor LaValle‘s does. In running his opinion I risk (further) inflaming some of my older white liberal readers (Hi Billie, love you!), especially those who are solidly in Obama’s camp — or were, until the FISA vote and other centrist back-trackings — but LaValle’s perspective is an interesting and provocative one.

It brings to mind a story my (older white liberal Obama-voting New Yawker) therapist told me about his 22-year-old son’s recent trip to visit grandma, who’s always voted Democrat but won’t now. She couldn’t explain substantively what she didn’t like about the candidate; she just had a bad feeling, an intuition that he was untrustworthy or otherwise problematic somehow. “I can’t believe my grandmother’s a racist,” the son kept saying afterward. “I just can’t believe it.” 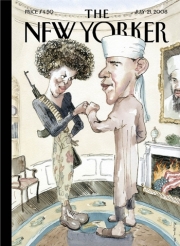 The July 21st issue of the magazine depicts Barack and Michelle Obama standing in the White House giving each other a pound. (I’m not calling it a “fist bump” and neither should you.) Barack is dressed in sandals and a turban. A portrait of Osama bin Laden hangs above the mantle. The American flag burns in the fireplace. Michelle wears a guerilla soldier’s clothing and touts a machine gun on her back. But for all this, the scariest thing in the picture is Michelle Obama’s hair. It’s certainly not an afro (aka a “natural”). As far as I can tell Michelle is rocking a jherri curl and that is a reason to be scared.

The magazine has defended itself, saying this picture is meant as satire, but I’m not quite sure who the joke is on. Is the joke on Michelle and Barack? No. They say the joke is about the fears and anxieties that exist about Barack and Michelle in the White House. But normally this kind of picture might also include the true subject of the satire, maybe a sleeping figure in the lower right hand corner who represents these fearful masses. Maybe George Bush or Rush Limbaugh. Or, unfortunately, even Jesse Jackson. The image of the Obamas would be inside those fluffy lines that indicate a dream.

But if nothing like that is in the picture whose nightmare could this be?

Let’s return to those Older White Liberals, the OWLS; this latest issue of the New Yorker is nothing less than their collective anxiety dream.

I’m a mixed race guy, black and white, and therefore pretty light-skinned (though I do get brown in the summer). But whether it’s summer or winter I’m never so light that I can pass for white. As a result I miss the conversations that happen when the colored folks aren’t around. Luckily for me I’ve got white friends and they’ve ratted the OWLS out.

One dear friend in particular has been privy to a certain kind of dinner conversation. She’s in her mid-30’s but she dines out with Older White Liberals sometimes. And at those dinners the OWLS all say the same thing whenever the question of Obama’s Presidency arises: “I just don’t think the nation’s ready,” they say. “I mean I’m ready, I’d just love it. But I don’t think the nation’s ready yet.”

Inevitably these folks are over 50, generally well-off and liberal to a fault. And yet, now that Barack Obama is the Democratic nominee for President they just can’t seem to get behind him. The last thing they’ll say on the subject is, “I don’t know what it is, but there’s just something about him that I can’t get behind.”

Now the problem isn’t that they’re stupid and they probably aren’t even lying. It is only identifiable as a certain “something.” The real problem is that Barack Obama stirs feelings that directly contradict the story they’ve told about themselves for decades. Maybe even as far back as the Civil Rights era. And these competing truths, rational liberalism and irrational fear, are driving the Older White Liberals out of their minds. Which all finally bubbled up, out of their great shared subconscious, as one startling New Yorker cover.

It’s startling for two reasons. The first is that the humor is just tone deaf and Barry Blitt is usually damn good. (The one where Barack and Hillary are in bed together, both reaching for the 3AM phone call, for instance.) But the second reason is that Older White Liberals are rarely this honest about such feelings. They’ve learned, long ago, not to let them out. It’s the fear that dare not speak its name.

Unfortunately it’s hard to have honest conversations. Nobody likes to be called out. When Older White Liberals are told that their hesitation about Obama is, in part, linked to some lurking prejudices they come at you with a rage. The same thing happened when you suggested that some men’s negative reactions to Hillary Clinton had more to do with the fact that she was an aggressive woman than with their principled disagreements about her health care policies.

But still, truth is truth. While much has been made about the fears of working-class whites in Pennsylvania and, of course, the white South, this New Yorker cover is the product of a different but just as panicked constituency, the unassailable Upper West Side.