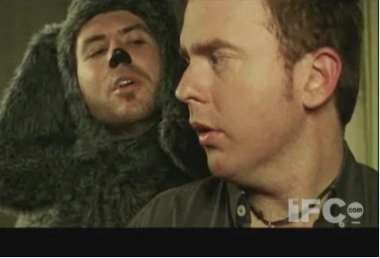 The plane back from Georgia was delayed, and all the pulled pork, okra, and cake I ate this weekend must have gone to my brain. I can’t concentrate to answer email, much less catch up on reading.

For now, try Wilfred, an Australian TV show being shown in daily installments at IFC.com. Ingredients: one man, one woman, and a bong-smoking dog who thinks he’s human. Says Brooklyn Skeptic:

When I saw clips of Wilfred at the party last night, I pretty much assumed it would be completely retarded. But actually, it is completely delightful. Basically, itâ€™s about a guy who is dating a girl with a dog – and the dog is played by a man in a dog suit. The dog says creepy things, smokes pot, likes to watch DVDs, and gets an itchy butt at night.

An old buddy from my Gainesville days is one of the masterminds behind IFC’s new Web Series lineup, but I point you to Wilfred because it’s funny, not because I need a check on the nepotism scorecard.

The Original of Laura, in facsimile