Vonnegut’s armageddon (and semicolons) in retrospect 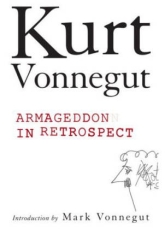 Some critics have characterized Kurt Vonnegut’s Armageddon in Retrospect as a disappointing epitaph, and I can see why. This collection of previously unpublished writings on war and peace doesn’t really cohere as a traditional anthology.

But as a road map of the literary path Vonnegut followed from a POW-repatriation camp to the publication of Slaughterhouse-Five 23 years later, it is immensely satisfying (and, at least to this first-time novelist, encouraging). “These early stories,” Julie Phillips observes in the Village Voice, “mainly illustrate the traps Vonnegut didn’t fall into, the wrong turns he didn’t take, the superficial answers he didn’t accept.”

To me the most gripping entry in the collection is the letter Vonnegut sent his family on May 29, 1945, when the horrors he witnessed in Dresden were still fresh. The L.A. Times‘ David Ulin writes:

Here, we see the writer in protean form, commenting on material he would later explore in his fiction: the absurdity of war, his experience surviving the firebombing of Dresden, Germany, the futility of looking for meaning in a world gone mad. “When General Patton took Leipzig,” he writes, “we were evacuated on foot to Hellexisdorf on the Saxony-Czechoslovakian border. There we remained until the war ended. Our guards deserted us. On that happy day the Russians were intent on mopping up isolated outlaw resistance in our sector. Their planes (P-39’s) strafed and bombed us, killing fourteen, but not me.”

This “but not me” is vintage Vonnegut, a sigh of resignation not unlike “Poo-tee-weet” or “So it goes.” There are other such whispers throughout the collection: “Wailing Shall Be in All Streets,” a slice of memoir about Dresden, or “Brighten Up” and “Just You and Me, Sammy,” which also spring from Vonnegut’s time as a POW, highlighting the fine line between collaboration and survival, between what we do to preserve our bodies and what we do to preserve our souls.

But while each of these pieces has its charms, they’re ultimately little more than first impressions, initial forays into the territory Vonnegut would revisit to such searing effect in “Slaughterhouse-Five.” That’s a process he evokes in “A Man Without a Country,” when he describes an encounter with a friend’s wife that forced him to see things in a different light. “In 1968,” Vonnegut noted, “the year I wrote ‘Slaughterhouse-Five,’ I finally became grown up enough to write about the bombing of Dresden. . . . Why had it taken me twenty-three years to write about what I had experienced in Dresden? We all came home with stories, and we all wanted to cash in, one way or another. And what Mary O’Hare was saying, in effect, was, ‘Why don’t you tell the truth for a change?'”

The full text of the letter is available online, but do try to pick up a copy of the book so you can see the facsimile of the actual document. In it, my beloved, semicolon-averse Vonnegut incorrectly uses two “hermaphrodite transvestites” of the punctuation world.