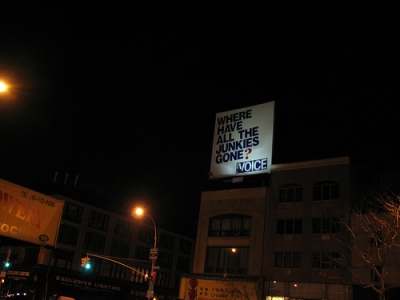 My review of Richard Price’s Lush Life appears in the Boston Globe’s books section this weekend. Here’s an excerpt:

Luxury lofts have replaced flophouses. Haute cuisine has supplanted the soup kitchens. Post-Giuliani, Manhattan’s once-edgy Lower East Side seems like a Wi-Fi wonderland, a kind of theme park where, as writer Richard Price has observed, young would-be artists flit between coffee shops, pretending to live in a never-ending production of “Rent.” Worrying over the effects of this gentrification has become such a cliche that, at the intersection of the Bowery and Delancey, a giant Village Voice billboard hovers, pointlessly asking, “Where have all the junkies gone?” Of course even the shiny, happy new New York City is host to the occasional stabbing, to your brutal sexual assault or botched drug deal, but what we really mean when we talk about crime waves in the oughts is an uptick in iPod rip-offs on the subway. Last year, according to David Simon of “The Wire,” there were more corpses shown on the three “Law & Order” franchises than there were actual homicides in Manhattan.

So far the public’s appetite for outdated New York murder stories rages on, but one of the finest practitioners of the urban crime novel, Richard Price, isn’t content to live in the past. Nor does he allow the place where he lives to be defined only by its newcomers. Beyond the restored tenements and the bars done up to look like old pharmacies, there are the projects, and there are the cops. There are families who’ve been in the area for generations. Price’s latest novel, “Lush Life,” explores the collision between the old and new Lower East Sides, the disconnect between the faux-Bohemians who swan through the streets, coked up, in their moccasins, and the kids from the projects who are forever being stopped and frisked by the Quality of Life Task Force.

You can read the rest here. For more about Price, see Chris Bolton’s Powell’s interview, or watch the author discuss Lush Life in the first episode of Titlepage.

A voice that wasn’t hers