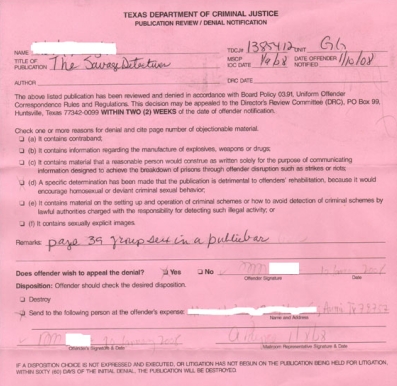 Texas Inmate No. 1385412 ordered a copy of Roberto Bolaño’s The Savage Detectives. When it arrived, the novel was rerouted to a relative in Austin, after a prison inspector determined that it might “encourage homosexual or deviant criminal sexual behavior” and be “detrimental to the offender’s rehabilitation.”

The disqualifying passage, which appears on Page 39, describes an oral-sex contest in a nightclub that ends when the champion vomits after nearly choking to death on the penis of a particularly sadistic and well-endowed customer.

It’s the kind of constraint that, in an alternate dimension, Bolaño himself could have been subject to. As Francisco Goldman noted in the NYRB last year, the author once “spent eight days in prison until, recognized by two guards who were former schoolmates, he was freed.”

The library of Borges’ childhood

Degrees of finish in printmaking