I started reading Tod Goldberg‘s entertaining blog a few years ago. Later we both contributed to When I Was a Loser, an essay anthology now banned in one Rhode Island high school. (Goldberg’s contribution begins like this: “If the truth be known, I would have preferred not meeting Zsa Zsa Gabor at all versus meeting her while covered in the pubic hair of my sisteen-year-old girlfriend.”) He’s also the author of two novels and a short story collection. 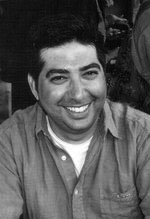 For the first twenty-five years of my life, I was under the impression that my Nana was a fabulous cook. Her meat pie was positively heavenly. She was the master of cream pies. Her crusts were so flaky and delicious that she could have made a pie out of unleaded gas and dandruff and it would still taste lovely. Her cookies would have left Mrs. Fields blushing with envy. Her baked chicken melted in your mouth. Her potato salad made every picnic at Pioneer Park in Walla Walla, Washington a culinary experience.

Since she was my grandmother, all of these dishes were delivered with a healthy serving of love and affection as well, thus cloaking each dish in a kind of romantic reverie. And yet, of all the dishes she’d prepared over the years, nothing topped her recipe for lochshen kugel.

For non-Jews, the mere idea of kugel often seems incongruent, depending upon the particular sect of kugel being prepared, since every family has a different recipe, some involving vegetables, some incorporating odd fruits, some with potatoes and cheeses. Some come ripped from the pages of a long forgotten portion of the Midrash which talked specifically about White Trash Jews, a subject best not discussed in a public forum. (IÃ¢â‚¬â„¢ve tried to wipe from my memory a kugel that included frosted corn flakes, but alas, I can still see it: A relative of a relative via marriage, standing in a kitchen with a box of Frosted Flakes, ready to pour them into a bowl with noodles, an onion and bing cherries. Somewhere, a Star of David was being burned on a front lawn, I just know it.)

I regaled my then-girlfriend and now-wife Wendy with descriptions of Nana’s delicacies prior to our trip to visit her the summer of my 25th year. Ever a dutiful grandmother, on that very first night sheÃ¢â‚¬â„¢d prepared all of my favorite dishes. Baked chicken, a meatpie, a kugel, plates and plates of cookies, cream pies and a bowl of potato salad so dense a Sherpa was needed simply to get a serving on my plate. With a few bites from Wendy, however, it all came crashing down:

Wendy: Nana, how do you get the chicken to stay so moist?

Nana: I baste it with mayonnaise every ten minutes for five hours.

That was all Wendy needed. She danced delicately around the rest of the food on the table, giving me what could only be called the Stink Eye as I plowed straight through the dishes, never stopping to ponder the culinary genius behind it, though hopeful that mayo wasnÃ¢â‚¬â„¢t a chief ingredient in the pies, too.

When we got home a few weeks later, Wendy took out the cookbook Nana gave each of her grandchildren and began thumbing through it. Ã¢â‚¬Å“You do realize,Ã¢â‚¬Â she said, Ã¢â‚¬Å“that all you need in order to make her chocolate cream pie is instant pudding and Cool Whip, right?Ã¢â‚¬Â

Intellectually, IÃ¢â‚¬â„¢m sure I did realize that. When I looked at the recipe and actually saw it, well, it felt… wrong. Sordid. Ugly. But right there was the truth: Mix instant chocolate pudding in a bowl with Cool Whip, add to pie shell, top with Cool Whip and cool for two hours. (Now, to be fair, there was a recipe for a pie crust in the book, but in later years Nana just used Mrs. SmithÃ¢â‚¬â„¢s.) I flipped through her recipes and found that these favorites of mine were typically not all that extravagant — meat, vegetables, a pie crust and… voila!

When I finally got to the page with the kugel recipe — which Wendy had decried as Ã¢â‚¬Å“Just wrong. Who eats sweet noddles? Blech!Ã¢â‚¬Â — the experience was far different. It was like looking at the hand of God.

I immediately ran to the store and picked out the ingredients, came home, made it and… it sucked. It was awful. It tasted starchy and dry and without much flavor. Could NanaÃ¢â‚¬â„¢s love really be what made it taste so good? I called my older sister Linda to lament.

Ã¢â‚¬Å“DonÃ¢â‚¬â„¢t you know that all of the recipes in NanaÃ¢â‚¬â„¢s cookbook are just slightly wrong?Ã¢â‚¬Â she said. Ã¢â‚¬Å“The measurements are off or thereÃ¢â‚¬â„¢s a missing ingredient in all of them.Ã¢â‚¬Â

Ã¢â‚¬Å“Oh, probably so when you make her recipes they wouldnÃ¢â‚¬â„¢t taste as good as when she makes them herself,Ã¢â‚¬Â she said. Ã¢â‚¬Å“But donÃ¢â‚¬â„¢t worry, IÃ¢â‚¬â„¢ve backwards engineered them all.Ã¢â‚¬Â Linda then proceeded to give me the correct recipe for the worldÃ¢â‚¬â„¢s greatest lochshen kugel. I went out and bought all the ingredients again and made another kugel and it was like Nana was sitting in my kitchen with me. Or, well, the nice, sweet Nana IÃ¢â‚¬â„¢d always known, not the evil one whoÃ¢â‚¬â„¢d screwed with her own cookbook just so her grandchildren wouldnÃ¢â‚¬â„¢t be able to make her recipes as well as she did. (ThereÃ¢â‚¬â„¢s no telling how much mayo youÃ¢â‚¬â„¢re really supposed to baste the chicken withÃ¢â‚¬Â¦)

Nana died a few weeks ago at the age of 95 and in her honor I came home from the funeral and made myself a kugel. It tasted like being seven and losing a soccer game; like being twelve and dining as the sun set over Loon Lake, Washington; like being thirty and sitting on her porch in Seattle; like being all the ages IÃ¢â‚¬â„¢ve ever been. HereÃ¢â‚¬â„¢s how you do it.

1 12oz package wide egg noodles
1 cup of sugar
1 grated apple (I prefer a Macintosh, though really any good red apple will work.)
1 handful of raisins (about a half cup)
1 to 2 tablespoons of cinnamon (I like to use a lot of cinnamon, so I go for 2 tablespoons, though my mother uses 1 and my sister uses 3Ã¢â‚¬Â¦)
1 egg
1/4 cup vegetable oil

Boil the noodles until they are done. Drain the noodles, add the rest of the ingredients and stir until all mixed. Pour into a greased metal pan. This is important: donÃ¢â‚¬â„¢t use a glass pan. For some reason, cooking this in a glass pan makes it burn more easily and taste not as good. Through extensive trial and error, weÃ¢â‚¬â„¢ve learned that a really cheap 9 X 11 pan is the way to go here.

Bake for between 45 minutes and an hour. For a crisp top layer, an hour should be perfect. If you prefer it a little less crisp, watch the cooking from about 45 minutes on to check for browning. Let it cool before cutting into squares.

The letters of Aldous Huxley