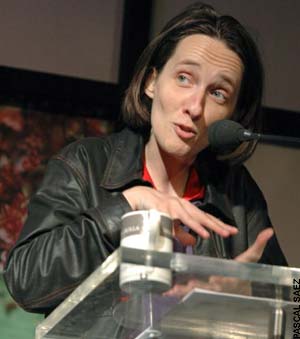 I can’t make it to A.L. Kennedy’s 92nd Street Y event with Roddy Doyle tomorrow night — months ago I made plans to see my friend Mark’s first reading from his forthcoming novel — but if I could split in two the other me would be uptown.

Regular readers may remember how terrified and thrilled I was to meet Kennedy a couple years ago. Several months after the fact, she happened upon my post about our meeting and wrote to ask why “people expect me to be in some way homicidal.” Really, she wondered, “did they send round a memo?”

Below I’m posting more of her message with permission, just so you won’t be shy about approaching her if you do get out to the Y.

Every time I meet strangers, it tends to go…

Them: And you haven’t killed me with an axe.

Them: I brought one with me just in case. So you wouldn’t get annoyed and kill me with a chair leg which would take longer and therefore be more painful.

Me: But I don’t want to kill you with an axe. Or a chair leg. Not with anything, if we get around to discussing it. I don’t randomly kill people. I don’t even deliberately kill people – except by using too much power and buying blueberries flown half-way round the world to my local grocer (even though they taste like sand) and by paying taxes to the War Machine… hang on, this is getting away from me. I mean — why expect me to kill you?

Them: To be more accurate, I expected general assault and maybe some killing.

Me: Just tell me — why does everyone expect me to be appalling to them? Did they send round a memo? Do I have the cold, blue eyes of a maddogkiller?

Them: Only from that one angle.

Me: Sheeesh… Does anyone have a cup of tea?

Them: Or you’ll kill us all?

Them: Thank you for not murdering me.

Me: I could get tetchy about this.

Them: And wipe us all out in a red frothy haze of carnage and teeth?

Me: No, not really. Think I’m going to look for some tea.

Image swiped from a Telegraph interview.

Narrative and the video game