Earlier this year, Agni published my friend Marie Mockett’s fascinating Letter From a Japanese Crematorium, one of the most elegant personal essays I read in 2007. (Photos at her own site supplement the story.)

Mockett is hard at work on a novel, but sometimes I lure her away from her desk to join me for meals. Fluent in Japanese, she is familiar with some of the city’s best, most obscure, and reasonably priced Japanese restaurants — and she’s introduced me to, among other things, the wonders of bamboo and lotus root. Below she explains how to prepare them with chicken. 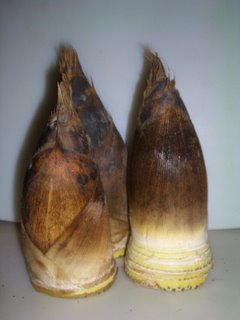 A few months ago, my mother showed up in New York carrying three bamboo shoots in her handbag. In my novel, I’ve a scene in which a mother and daughter prepare similar shoots for dinner; my mother thought it might be smart to put the fictional recipes to the test. The delicate top of the shoot went into a salad dressed with miso. The middle was thinly sliced and used to season white rice. The bottom of the shoot was coarsely chopped and cooked with chicken.

The good news; the food tastes great! The bad news; real bamboo shoots like this are difficult to find. Your best bet is a Chinese grocery store, but Japanese shops may well carry a pre-prepared shoot in shrink wrap. I’m not sure how my mother came by these, nor have I asked.

I’ve always been told that real bamboo — the iridescent stalks so atmospherically used in classic samurai films and the contemporary Crouching Tiger, Hidden Dragon — doesn’t grow in the west. We have a kind of wimpy bamboo that’s much thinner and while edible, doesn’t have the rich flavor of the fat shoots you see here.

Bamboo pride is one of the many ways in which Japanese friends — and chefs in particular — often remind me of the superiority of Japanese culture. But my grandfather recently told me that this kind of thick bamboo wasn’t actually native to Japan either; he swears it only came over from China in the last couple hundred years. “Everything comes from China,” he said wonderingly, in the manner of a humbled Japanese scholar made aware of his roots over time. Regardless, the flavors below are 100% Japanese — and delicious. 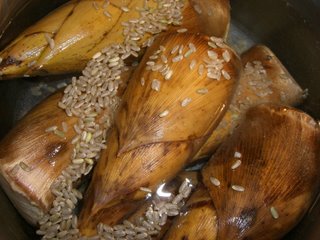 First you’ll need to prepare the shoot for cooking. Submerge shoots in a pan filled with water. Add one quarter cup of brown rice (measurements are approximate, and do depend on the size of the shoot). Bring pan to a boil. Turn down the heat so the boiling stops, but the water is still gently rolling. After about fifteen-minutes to a half an hour (depending on shoot size), turn off the heat and leave the bamboo to soak overnight. The next day, drain the water and peel the husk; it should come off easily, revealing gorgeous blond meat. 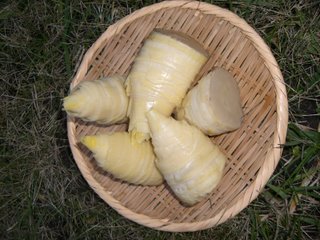 (Yes, I know this is more than 3 shoots. I didn’t like the photo of the original 3 shoots after they were peeled. And, yes, that means these recipes were tried more than once).

Cut off the top part of the shoot–this is the most delicate meat. Slice into thin pieces; you want to have about a quarter cup. 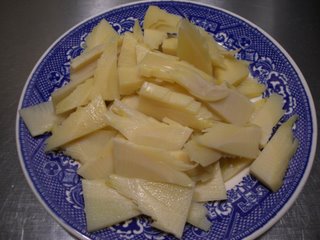 Next, cut a half a green onion into inch long pieces. Parboil these for a few minutes, then drain and cool.

In the meantime, prepare the dressing. Mix two teaspoons of miso, a third of a teaspoon of sugar and two teaspoons of vinegar (I use rice vinegar). Mix this till it is smooth, then combine the shoots, the green onions and miso dressing together. 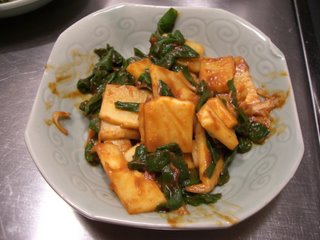 Wash rice, drain, and put into a rice cooker. Add 2 tablespoons of sake and water to the appropriate level as indicated by the rice cooker. Add thin slices of bamboo from the middle of the shoot (about a half cup for three cups of rice) and
thin-sliced strips of fried tofu (age: 2 squares). Finally, add one-and-a-half teaspoons of dashi on top of the rice.

When the cooker begins to boil hard, open it up and the mix rice and thoroughly. Replace lid. When the rice cooker indicates that the rice is cooked, immediately
“fluff up” rice from the bottom using a rice paddle. Wait another 30 minutes before serving. 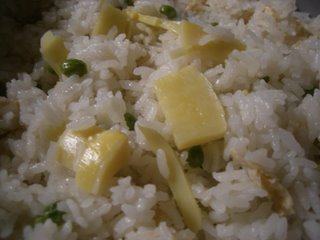 Chicken and Bamboo or Chikuzenni 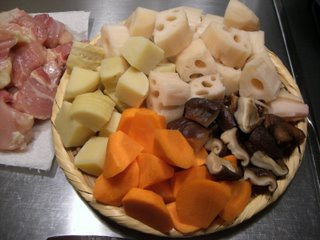 Saute chicken thigh meat (tastier than the breast, which tends to be dryer). When the thigh meat turns whitish, add the following ingredients: carrots, lotus root, soaked shiitake, (save the juice) and the bottom part of the bamboo shoot. After a few minutes, add some “satoimo,” or Japanese sticky potato.

Add the shiitake soaking juice almost to the top of the ingredients. Bring to a boil then turn down heat so the juice rolls gently, and cook for about 20 minutes.

Add 2 tablespoons of sake and 1 teaspoon dashi. Cook for another 10 minutes. Add snow peas for the color if desired. 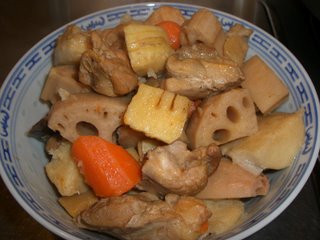