Happy weekend from the Anheuser-Busch distributor 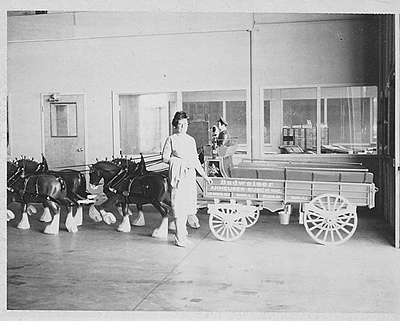 For a woman who claimed to dislike drunks, my grandmother sure had a knack for attracting them.

Of course she wasn’t responsible for her gallivanting father, Zone. And we have to give her a pass on the very charming first husband, Robert Bruce, who, Granny claimed, squandered so much of her money on booze, she couldn’t even afford to buy my mother a toothbrush.

But years after kicking Robert out, she married again — to another alcoholic, an older man. Smith was at least doting, and had some money of his own, but he still stumbled home, raving, from the bar, whereupon he would have to be restrained and dragged to bed. My mother recalls him standing at the window, in his underwear, with a shotgun.

Granny even worked for a beer distributor. In this photo she stands outside Ben E. Keith, an Anheuser-Busch outlet where she worked as a secretary/office manager. I believe she started working there shortly after ridding herself of Robert in the early 1940s. This shot, according to my mother’s notes, was taken around 1960, when my grandmother was in her mid-fifties.