From time to time I’m posting bookstore appreciations from readers. Below Drew Johnson, a writer whose fiction has appeared in Harper’s and StoryQuarterly, and is forthcoming in Virginia Quarterly Review, praises Troubadour Books of North Hatfield, Massachusetts. 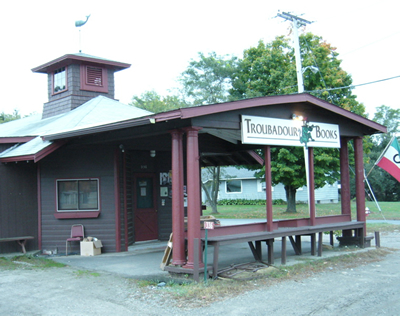 Bob Willig’s Troubadour Books is a plain brown building that sits behind a dirt parking lot, mixed in with houses, tobacco barns, and farmland, while Rt 5 passes by, heading up the Connecticut River Valley toward Vermont. This part of the river runs through the Pioneer Valley, an archipelago of small and medium-sized towns with enough used and new bookstores that any honest New Yorker ought to admit that the Strand is long past its prime and make the three-hour drive north.

The colleges help the used bookstores, I think. As do the professors, who retire — putting some of their books back into circulation — or die — putting in all thirty boxes at once. These are the Scooby-Dooschools we’re talking about: Smith, Mt. Holyoke, UMass, Amherst, and Hampshire.

So I really could have written about any of several bookstores in a number of towns. I used to take a Saturday and drive to as many as I could manage, from Bernardston Books near the Vermont border to Sage Books in Southhampton. Over to Bookends in Florence or stopping by Gabriel, Metropolitan, Raven, Half-Moon, or the Old Book Shop in Northampton on my way to Amherst Books and nearby Valley Books. And just across the line from Hatfield into Whately, the Whately Antiquarian Bookshop occupies an old brick schoolhouse. A little farther up, in the shadow of Sugarloaf, Meetinghouse Books has taken over a 19th century chapel.

Another ten minutes and you reach the Montague Book Mill, a former gristmill overlooking the Sawmill River, where this summer my wife and I were married. 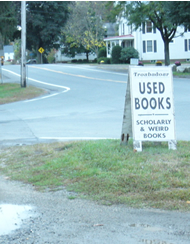 The day of the wedding, my best man and I ducked out of the hubbub on the pretense of running an errand. On impulse, I turned the car towards Troubadour. Bob Willig was there and I told him what we were in the middle of. Apparently, he had done the same thing — lit out with a friend the morning of his own wedding and hit a bookstore or two. Discovered an old Eastern Mass landmark, the Clam Box. Bought some books, ate some clams, got married.

It’s hard to imagine who would have understood where I was as well. Troubadour is a sympathetic bookstore.

The building used to be a gas station and then a farm stand, another bookstore, and a junk shop. Bob Willig used to be a D.C. bookseller twice over, a theology student, a sailor in the Gulf of Mexico, a mediator, and a clown with his own magic show.

For me the building seems unchangeable, even though the operation had only been open for two years when I first found my way there in 1997. IÃ¢â‚¬â„¢ve brought back some treasures: first editions of Harry Mathews’ Tlooth and The Conversions, David Markson’s book on Malcolm Lowry, and most of the Ecco 13-volume Tales of Chekhov.

Troubadour is a bookstore with a lot of stealth organization. Huge stacks of books are everywhere but are consistently organized by subject and there isn’t much of the “filler” that dominates many used bookstores. And unlike most used booksellers, Willig is still doing most of his business in-person, with only about 1 book in 10 sold online.

The stock is strong in all kinds of subject areas: poetry, medieval history, art monographs, all that is both deeply and vaguely progressive, literary criticism, weird books, and first editions.

I didn’t buy any books on my wedding day, although my best man did. Didn’t manage any the last time I passed through Hatfield, although I was tempted by a copy of Norman Mailer’s The Fight — with the name of a former professor inscribed on the flyleaf.

The books I don’t buy on a first visit to Troubadour are seldom there on a second.

Where do all those unbought books go?

If you’d like to see your favorite bookstore mentioned, send email to bookstores [at] maudnewton [dot] com telling me about it. Please include a photo or a link to one.