Lost in the supermarket, far from Russia 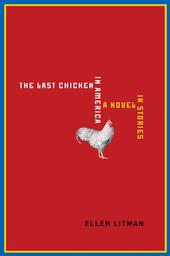 My review of Ellen Litman’s The Last Chicken in America appears in the weekend’s New York Times Book Review. Here’s an excerpt:

That people won’t read story collections is an axiom at publishing houses and a common notion in newspaper idea pieces. Whether it was ever true I tend to doubt, but it certainly isn’t now. Evidence springs effortlessly to mind — Junot Díaz, ZZ Packer, Lorrie Moore and George Saunders are just a few of the youngish writers beloved first for the short fiction that started their careers — yet the distrust persists.

When a good novel fails to find an audience, it’s the fault of bad marketing, unappealing cover art or a public too dim to appreciate literary fiction. But if short stories don’t sell, publishers blame the form. The resulting skittishness may account for the rise of the “novel in stories,” a hybridized creature typically denoted, as in the case of Ellen Litman’s “Last Chicken in America,” by an italicized subtitle.

The worst of these books are chilly and labyrinthine. You follow dour characters down corridors of plot, theme or emotion that threaten to lead to some destination, but never actually do. Litman’s elegantly constructed web of stories about Russian-Jewish immigrants living in the Squirrel Hill section of Pittsburgh is the converse of such aimless solemnity. It’s warm, true and original, and packed with incisive, subtle one-liners.

In the first story a family dazed by “the earnest pinks and yellows and blues” of American packaging wanders supermarket aisles. The narrator’s mother, who pores over the store’s circulars “as if they were a map to a treasure island,” is waylaid in the soups section by a boy from the home country who’s gone native. He flashes an “unpleasantly wholesome American smile,” the narrator, Masha, tells us. “It emanates charm and fluoride, good fortune and good breeding, and you either know it’s fake and don’t trust it, or you trust it too much.”

You can read the rest of the review here. The book has also garnered praise from Carolyn Kellogg (of Pinky’s Paperhaus) in the LA Times Book Review, and Irina Reyn in The Moscow Times‘ Context.

According to Litman’s blog, her pub date coincidentally fell on the 15th anniversary of her family’s immigration to the U.S. from Russia.