While I focus on things other than blogging this month, I’m running a series on independent bookstores. Below Marco Romano praises Dove & Hudson of downtown Albany, New York. 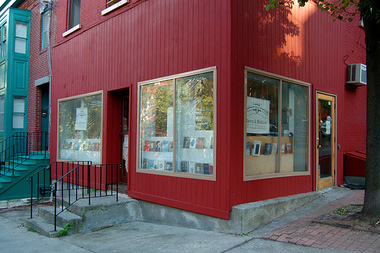 Dove & Hudson Old Books is located on a corner in what was once the heart of the residential section of one of Albany’s largest neighborhoods. Much of the area succumbed to “urban renewal,” i.e. The Empire State Plaza and Nelson Rockefeller’s tombstone, so there’s not much in the way of business in this part of exciting downtown Albany, NY. I was surprised to find a store of this caliber there.

Dan Wedge, the owner, lives above the shop. He restored the building and created a fine space for a wealth of titles focused on literature, history, art, and religion. Over the years, I have purchased a variety of books from Dove & Hudson, including Lawrence Durell’s Alexandra Quartet, C. Kerenyi’s The Gods of the Greeks and The Heroes of the Greeks, Annemarie Schimell’s Rumi’s World, Philip Kapleau’s The Three Pillars of Zen, and Milan Kundera’s The Unbearable Lightness of Being, Laughable Loves and The Book of Laughter and Forgetting.

The store has no seating areas, but I tend to stay and talk jazz with Dan since that is what he usually has playing when I go. (See also Metroland’s praise for Dove & Hudson.)

Image swiped from DJ Fix at Flickr. If you’d like to see your favorite bookstore mentioned, send email to bookstores [at] maudnewton [dot]com telling me about it. Please include a photo or a link to one.