Below critic and Observer columnist Chris Lehmann — who, like many people I know, holds strong ideas about what a bookstore should be — praises D.C.’s non-profit Books for America, while excoriating just about every other option in the city. Having never shopped for books in the nation’s capital, I’m agnostic on the targets of his ire (though I’m dying to visit the place he likes). Tomorrow I’ll post a reader’s more positive take on Kramerbooks and Afterwords — or, as Chris sees it, the “Yuppie pick-up venue decorated haphazardly with Times bestsellers.” 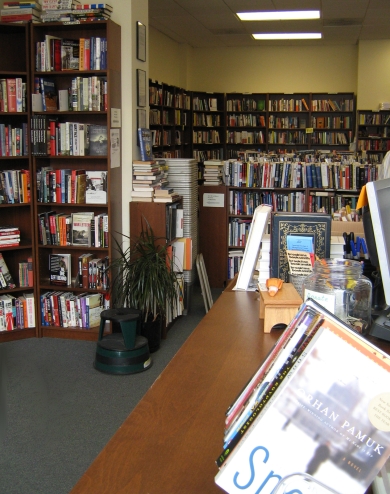 Among its many other well-documented disappointments, Washington is badly fixed for good bookstores. The cityÃ¢â‚¬â„¢s permanent standing army of wonks and think tankers either feast on free review copies or do their grimly efficient intellectual trading at the standard B and N or Borders outposts. And that means that stores that traffic in literary-cum-indie fare are either too embattled (e.g., the well-meaning but erratically stocked Chapters, in downtownÃ¢â‚¬â„¢s revived Penn Plaza neighborhood), too self-satisfied (the outer Northwest depot of bien-pensant reading, Politics and Prose, which does for written smugness what NPR does for the broadcast audio kind), or too fraudulent (the overhyped Kramerbooks and Afterwords in DuPont, pretty much a Yuppie pick-up venue decorated haphazardly with Times bestsellers) to satisfy hard-core browsers.

Meanwhile, the cityÃ¢â‚¬â„¢s used stores tend to lord over their superior stocks with off-putting attitude: DuPontÃ¢â‚¬â„¢s Second Story Books is fertile browsing turf for neglected or hard-to-find titles, so long as you donÃ¢â‚¬â„¢t interrupt the purist indie-rock conversations among booksellers at the register, while the recently shuttered Kultura, up the street on Connecticut Avenue, was notorious for its hostile clerksÃ¢â‚¬â€œmany of them expats from Eastern Europe who seemed more disposed to denounce you to the Stasi than to direct you to the Essays and Criticism aisle.

So it was with mingled anticipation and dread that I saw the announcement that a used bookstore was opening just down the street from my workplace, in the odd north-Dupont frontier best known for midrange tourist hotels and a handful of aggressively gay nightclubs. While I perked up considerably at the notion of strolling over for lunch-hour book binges, I was also a distrustful sufferer of WashingtonÃ¢â‚¬â„¢s peculiar battered-browser syndrome.

WhatÃ¢â‚¬â„¢s more, the sign on the storefront said the new store was to be called Books for America, which sounded like a nerdy subsidiary of Radio Free Europe, or some sort of CIA front. The unassuming retail spaceÃ¢â‚¬â€a fluorescent-lit glass-front faÃƒÂ§ade sandwiched between a hair salon and a rarely open art galleryÃ¢â‚¬â€did little to dispel such misgivings.

But when I first walked in to the newly opened store, back in November 2005, I saw that all my apprehensions were completely unfounded. The shelves were amply stocked with a great range of books. At the front of the store was a generous complement of echt-Washington reading: US history, international relations, military strategy and history. But the further you went in, the quirkier things got. An end-shelf display of older hardcovers yielded a great three-volume British edition of John RuskinÃ¢â‚¬â„¢s Stones of Venice. Turning to the fiction wall, I saw a number of long-sought titles leap out at me: Black Lizard reissues of Eric Ambler classics like Journey into Fear and A Coffin for Dimitrios; a University of Chicago reprint of Peter DeVriesÃ¢â‚¬â„¢s Blood of the Lamb; Michel HoullebecqÃ¢â‚¬â„¢s effectively creepy demolition job on the sexual-liberation counterculture, The Elementary Particles. And even with the shelves bursting with offerings, the floors were strewn with open boxes of yet-to-be shelved titles — not overstock or duplicates, but strange and inviting new offerings just yearning for shelf space. Here, in other words, was what DC had been sorely missing: True bookish abundance, displayed without fuss or attitude, designed to keep browsers foraging for that next score.

Indeed, I was pulling down books so enthusiastically that I hadnÃ¢â‚¬â„¢t bothered to check the prices. IÃ¢â‚¬â„¢d assumed that IÃ¢â‚¬â„¢d open the covers to find an inflated version of the original price written in pencil, then decorously stricken through to advertise a dubiously conceived Ã¢â‚¬Å“half-offÃ¢â‚¬Â price, per the now standard used-store practice. But approaching the register, I took another look, and saw that the books had white stickers indicating insanely low prices: two bucks each for all the fiction I nabbed, and five dollars for the Ruskin triple-decker.

As I checked out, I asked the storeÃ¢â‚¬â„¢s proprietor, a gregarious recovering business school graduate named Steve Hersey, what was going on. The store, he explained, was part of a nonprofit group he founded, to donate books to schools, prisons, hospitals — basically any institution that needed them. BFA had sponsored periodic public sales in one of the neighborhoodÃ¢â‚¬â„¢s now-defunct midrange tourist hotels to help fund the project, and now the group was swimming in inventory, so the time had come to open a proper store. He explained further that for a nominal $20 annual fee, shoppers could take out a membership, and get an extra 10% off the storeÃ¢â‚¬â„¢s already scandalously low prices. I didnÃ¢â‚¬â„¢t hesitate.

IÃ¢â‚¬â„¢ve been about a twice-weekly regular ever since, routinely returning from lunch with anywhere from a handful to a bagful of BFA finds. (The store has also been responsible for turning my office into a virtual BFA outlet, since as my wife regularly reminds me, scarce media storage space at home makes big influxes of newly scored books something less than a marital boon.) This past week the store had one of its biannual 50% off sales (yes, you read that right). My two-bag take included Seamus HeaneyÃ¢â‚¬â„¢s translation of Beowulf, a hardcover Arthur Schnitzler story collection, another collection of short fiction-vignettes from the very obscure 60s Polish satirist Slawomir Mrozek, and Anthony TrollopeÃ¢â‚¬â„¢s The American Senator. At roughly, oh, $1.50 a title. (ItÃ¢â‚¬â„¢s true that the success of the store has permitted Steve to edge his prices up slightly, though mainly for hardcovers — even quality paperbacks tend to top out at $4.)

Oh, and right — the store also stocks CDs, DVDs and audio books, which meant I also got the one good Folk Implosion record, Half a Lullabye, a fine late-70s punk anthology, plus five discs worth of Haydn. DVDs and audiobooks are more hit and miss, but still eminently raidable for short-notice roadtrips or lazy nights at home.

For all the thrift and abundance of BFA, however, its real pleasure is the idea of the store, and the dedication of the staff. IÃ¢â‚¬â„¢ve overheard them patiently field vague phone queries for this or that new blockbuster novel that would draw snorts of derision from the clued-in crew three blocks up P Street at Second Story. IÃ¢â‚¬â„¢ve swapped Alice Munro or Angela Carter recommendations with the booksellers (Steve has a paid staff of half-dozen or so now, plus a volunteer squadron who helps unpack donations at the storeÃ¢â‚¬â„¢s Virginia warehouse), and new CD picks with the storeÃ¢â‚¬â„¢s resident indie rock enthusiast. (For customers not fortunate enough to live or work nearby, the store also puts some of its more collectible stock for sale online, at Amazon. )

In a workday overstuffed with the minutiae of congressional infighting, IÃ¢â‚¬â„¢ve come to count on BFA visits to restore me to some clearer sense of what matters in the world. And the knowledge that my obsessive book accumulation can be turned to the larger social good of stocking free libraries and combating illiteracy means I can feel that much less like an asocial bookish freak. At least until I get back to work.