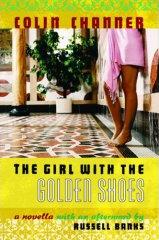 Colin Channer’s The Girl With the Golden Shoes centers on a girl who becomes an object of suspicion and gets kicked out of her fishing village after teaching herself to read. “She’d not been led to reading by a great ambition — that was something reading had produced. But this wasn’t easy to explain.”

Setting out for the city with a bar of soap, a change of clothes, and 50 pounds and 50 pence, 15-year-old Estrella is determined to buy a pair of shoes, get a job, and someday travel to Europe, a place she’s learned about from books. Temptations arise, mostly in the form of sweet-talking men, but she stays focused.

This is not Channer’s first powerful female protagonist. Geoffrey Philp observed in an interview last year that he excels at creating them. “What’s wrong with you?” Philp joked.

“I donÃ¢â‚¬â„¢t make a real distinction between [male and female characters],” Channer said. “For me it comes down to this, an interesting person who wants an interesting thing for an interesting reason. Weak women are not interesting so they’re not worth placing at the center of a narrative.”

In an afterward reproduced with permission below, Russell Banks accurately paints The Girl with the Golden Shoes as a “nearly perfect moral fable.” You can read an excerpt from the novella here.

We don’t see it attempted much these days, perhaps because American writers (and readers) are so blindered by standard-issue realism on the one side and escapist fantasy on the other, but Colin Channer’s The Girl with the Golden Shoes is a nearly perfect moral fable. It’s an ancient, essentially European literary form, the moral fable; but think of Hemingway’s The Old Man and the Sea or Thornton Wilder’s The Bridge of San Luis Rey. Think of Faulkner’s The Bear or Stephen Crane’s The Red Badge of Courage. Those are the modern American classics in the form. A more recent example is Cormac McCarthy’s The Road. Like them, The Girl with the Golden Shoes is a short narrative, shorter than a conventionally realistic novel, that is, but not so short as to be confused with a mere story. Like them, it’s set more or less outside of present time, yet is not meant to be read as historical fiction, and happens in a place that’s slightly outside the known or at least the familiar world. Even the title, The Girl with the Golden Shoes, calls to mind those old fables and fairy tales, pre-Christian European folk tales and medieval romances.

The protagonist is individualized, yes, a recognizable Afro-Caribbean country girl of the early 1940s born and raised on a recognizable Caribbean island that’s a little like Cuba, a little like Jamaica, and a little like Hispaniola or Trinidad, yet none of the above. She’s a spunky, intelligent girl named Estrella — ah, yes, the star — poised at the exact end of childhood and the exact beginning of adulthood. But she’s from a world that does not recognize adolescence; that is to say, a world way older than ours, in which there are children and there are adults and nothing in between; and thus, of necessity, she seems flattened somewhat, a pre-modern “type” — or better yet, an archetype. Estrella is the archetype of the innocent provincial youth who one day sets out for the big city, here called Seville, to find her fortune and her fate. To become somebody. It’s usually a boy on this journey, rarely a girl, but Channer knows that archetypes are gender-blind. And given his tripartite theme of dependency, trust, and betrayal (about which, more later), it’s a more intriguing tale morally if it’s a girl. She’s adopted, sort of, raised by her grandparents, which is to say she’s a child without real parents, a foundling without a binding self-defining family, making it necessary for her to locate her true identity outside the family, to find it even, as is typical, outside the community she’s been raised in. For the community has cast her out. The reason being — again, typically — she’s the solitary bearer of a curse, the unintentional cause of widespread, otherwise inexplicable suffering in her village. This makes her an exile, a wanderer who can’t go home again.

Condemned to travel the open road, she will be tested and tempted, and the tests and temptations will create her character, which, by the end of her tale, will be different than it was at the beginning. By the end, no longer a child, no longer innocent or naïve, after many trails and tribulations, Estrella will have arrived at adulthood, wise and walking in a state of grace that is apparent to all who meet her there. Still dependent (she’s a black woman, after all, and this is a racialist society, and sexist); but no longer trusting. She’s protected therefore against betrayal and thus is able to place a wholly legitimate claim on those emblematic gold shoes. It’s Cinderella and Sleeping Beauty and The Frog Prince all rolled into one. With a little Huckleberry Finn and Tom Jones thrown in for good measure.

Well, it’s all fine and dandy, all well and good, to admire the ease and intelligence with which Colin Channer has engaged the ancient and honorable, essentially European tradition of the moral fable, and important to praise the way he’s introduced into it elements that are native to the Caribbean archipelago and therefore to the African diaspora, bringing it up to date and speed, as it were, and in the process reinvigorating it. He’s creolized the form, given it a strictly New World DNA without cutting off its Old World roots. That alone is an extraordinary achievement. But we ought also to admire the apparent ease and intelligence with which he has addressed a modern (actually a post-modern, post-colonial) linguistic conundrum: the problem of representing on the page the music and clarity of creolized English, which is, of course, the language his character think, argue, make love, and dream in — except when they happen to be speaking to their colonial masters or to the inheritors of the masters’ linguistic standards of excellence and correct articulation. The problem is that if one is a writer from the Caribbean, one has to write both. It’s a challenge that few of Channer’s literary forebears, even great writers like V.S. Naipaul and Derek Walcott, have been able to meet, and few if any of his contemporaries. Perhaps only the polyphonic Caryl Phillips has solved this problem as effectively as Colin Channer.

The perennial question for Caribbean writers is how to represent creolized English without making of it a mere dialect, a diminished version of the mother country’s mother tongue — that’s the problem, the post-colonial problem: to somehow use and abuse the language of the oppressor in order to both subvert the oppressor’s mentality and tell a tale that’s true to the teller’s deepest, most intimate experience. Channer is the master of this bait-and-switch. Look at how skillfully he slips between the two kinds of diction and grammar; check his smooth moves as he slides his narrative in and out, ringing the changes from subjective to objective point of view, following the float from first person to third, simply by switching language tracks from creolized English (a Caribbean patois) to so-called standard English and back again.

But is jealous they jealous like Joseph brothers. And one day, one day — it might take awhile, but is sure to come — a blight going to take this island, and they going have to come to Seville. And they going to see me and ain’t even know is me until I tell them. That is how much I going change.

“Mister, don’t mind,” she whispered to the rifleman beside her. She tapped his shoulder through the heavy wool. “Mister, don’t you mind.”

Without looking, he removed her hand and gently squeezed it with condolence. For her. For him. For history. For life.

His father and brother laughed.

Nobody does it better; at least nobody I know.

A few words concerning the themes of this fable. Without being reductive, it strikes me that there are three interwoven themes or conflicts being dramatized here. Moral conflicts, if you will, since this is after all a moral fable. They are dependence, trust, and betrayal. Because Estrella is a trusting soul (still a child, remember), and because she can’t escape being dependent — on men, on white people, on mixed race people, on people who possess the authority and power (and arms) of wealth and the law — she is betrayed over and over again. We see early on that she’s got to lose that trust; she’s got to become disillusioned. It’s the only way she can protect herself against being exploited by others. And so the narrative is at bottom an account of the long and arduous process of becoming disillusioned. It starts at home in an impoverished fishing village, where Estrella is betrayed by her own grandparents, on whom she depended and whom she trusted to keep and protect her, and ends in the capital city of Seville, where she finally is somebody, regardless of her station in life, because she can no longer be fooled. She says to the white man who has just offered her a job and a home:

“I ain’t want to wear you wife old shoes, Mr. Rawle. I walk too far from country for that. I need a ride to Salan’s. I need to buy my own.”

“I thought you didn’t have any money.”

“I lost it. But is your fault, so you going have to give me back fourteen pounds and fifteen pence.” Then she remembered the money from Wilfredo, whom she thought of as Simón. “Plus twenty pounds on top of that.”

Now that is no easily duped girl talking; not anymore. That is a woman to contend with.

Finally, it might be asked if we should add The Girl with the Golden Shoes to that short list of American classics I mentioned earlier, The Old Man and The Sea, The Bear, and so on. It’s unfair to compare it to those great and finally incomparable works, as this is the work of a relatively young writer still mapping the shape of his imagination, and consequently there is here and there then occasional stylistic tentativeness one associates with such a writer. Nonetheless, his standards for his book are set as high as those set by the American masters of an earlier generation, and that is how great literature gets made. Give thanks and praise, then. This man, Colin Channer, is clearly in the business of helping make great literature.

Later: At Antilles, the weblog of the Caribbean Review of Books, Nicholas takes strong exception to Banks’ remarks about dialect. While conceding that Channer “does very convincingly portray on the page the invented ‘native dialect’ he calls Sancoche, moving fluidly from there into ‘standard’ English and back,” he says “to my ‘native’ ear, he doesn’t do this with such breathtaking skill and originality as to justify Banks’s imperious swipe at, well, the whole tradition of West Indian writing.”