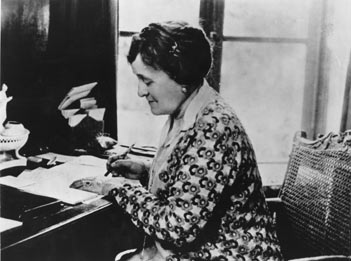 Reading Hermione Lee’s biography of Edith Wharton, I’ve been fascinated by the descriptions of Wharton’s writing process, which was by turns scattershot and obsessive. She started and abandoned projects willy-nilly, but when she focused on something, she rewrote sentences over and over again.

Wharton’s own writing life was, after 1899, so high-voltage, so prolific and efficient, that it is startling to find it crowded, too, with unfinished novels, plans for unpublished stories, poems that stayed in manuscript form and abandoned sequels to several of her novels. She often worked on two books at once, one of which would succeed and the other not, and she had several long-running projects which eventually turned into something different, or were given up.

In the early days, she would switch unpredictably between different projects. “I never do write what I say I am going to,” she wrote only half-apologetically to Scribner in 1905…

When Wharton talked in old age about her writing methods, she said (as many novelists do) that her characters “arrived,” “coming seemingly from nowhere,” complete with their names. They “then began to speak within me with their own voices.” It sounds from this as though she subscribes to the idea of the writer as a kind of unconscious medium, through which the narrative flows onto the page. But she also says, firmly, that her characters never “walk away with the subject”: she knows “from the first exactly what is going to happen to every one of them.” So she describes a double operation (which parallels the mixture of cool analysis and deep emotion in her fiction). The process of writing “takes place in some secret region on the sheer edge of consciousness” but “is always illuminated by the full light of my critical attention.”

That double process can be traced in her archives. Most of her novels and stories, whether finished or unfinished, can be tracked from first thoughts to reviews. First there are the notebooks and “donnée” books, with plot suggestions, character lists, story outlines, and single aphorisms and epigrams waiting to find a good home. Then there are the résumés or “scenarios” of the plots sent to the publishers, usually much as in the final version. Often the manuscripts of the novels are prefaced by chapter summaries in the present tense. The manuscripts have all gone through a similar process of evolution. Before the typing stage, they are written in black ink on blue paper, with many crossings-out and corrections. Where these are so numerous as to have become illegible, strips of paper are pasted over the original sheet of paper with the new versions (themselves often corrected). Some sheets will have three or four strips laid over them, and sometimes the origianl page has been cut up and stuck on again at the bottom, so that bits of the original text show through the strips or continue below them. What can read as a smooth, easy passage of prose, with a feeling of complete inevitability and confidence in the phrasing, has often gone through several such cut-and-paste jobs…

In the conversation between Ellen Olenska and Newland Archer in the carriage in The End of Innocence, for instance, the manuscript develops like this:

(This, but without “abruptly,” was the final printed version.)

In the scene at the end of The House of Mirth when Lily slips out of consciousness, imagining that she is holding Nettie Struther’s baby, the manuscript changes read:

The final version is: “She settled herself into an easier position, hollowing her arm to pillow the round downy head, and holding her breath lest a sound should disturb the sleeping child.”

In The Reef, Anna’s desire to say good-bye to Darrow at Givré in the place where they were first reunited, is rewritten thus:

Anna wanted, before he left, to return to the place where they had sat on their first afternoon together. She was deeply sensitive to the appeal of inanimate things, the look of rooms and of landscapes, the colour and texture of whatever, in emotional moments, wove itself into her dreams, and she wanted to hear Darrow’s voice, and to feel his eyes on her, in the spot where, for the first time, bliss had flowed into her heart.

Her sensitiveness to the appeal of inanimate things, to the colour and texture of whatever wove itself into her emotion, made her wish to hear Darrow’s voice, and to feel his eyes on her, in the spot where bliss had first flowed into her heart.

In all such key scenes, Wharton knew exactly what she wanted the scene to do and what the atmosphere should be like, but the detail is fine-tuned. Even the unfinished fragments that fill her archive (like the “Beatrice Palmato” draft, written in pencil) are heavily corrected. And even after the success of The House of Mirth (which had been taking tentative shape in her notebooks since 1900 under the title “A Moment’s Ornament”), there were still plenty of such false starts.

Branding and Freedom, and the MP3 that wasn’t