E.B. White on the tricky valuation of a writer’s time 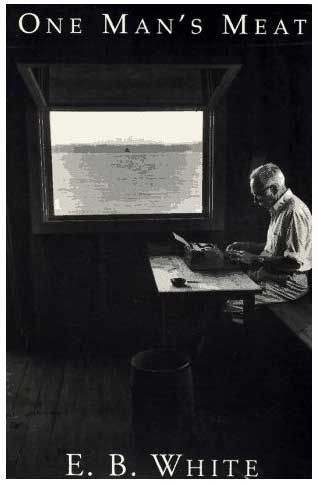 Some writers shame and immobilize me with their brilliance, while others, like Twain, de Vries and Spark,* dwarf my own efforts but inspire me to keep on. It’s hard to pinpoint what separates the two groups; if pressed I’d say it’s an affinity of perspective — a morbid fixation on the absurdities of human existence — combined with precision, bluntness, and humor.

Of late, E.B. White has joined the second group. I’ve been making my way through One Man’s Meat — a collection of essays about leaving New York City for his Maine farm — and I particularly enjoyed this bit from an essay on his failed efforts to raise turkeys for money:

I’ve previously mentioned this great aside, in the same vein, from his Paris Review interview:

Delay is natural to a writer. He is like a surfer — he bides his time, waits for the perfect wave on which to ride in. Delay is instinctive for him. He waits for the surge (of emotion? of strength? of courage?) that will carry him along. I have no warm-up exercises, other than to take an occasional drink.

I guess the reason writers have to clear the decks is that they never know when the “moments of sustained creation” will come, and they have to be sitting in front of the page, waiting for them — and pushing through the others.

* Twain for his essays, de Vries for The Blood of the Lamb, and Spark for everything.

See (and hear) also: a 1942 interview with White on One Man’s Meat, rare recordings of the author reading from Charlotte’s Web and The Trumpet of the Swan, and his response to a fan who wanted to visit him at his farm: “Thank you for your note about the possibility of a visit. Figure it out. There’s only one of me and ten thousand of you. Please don’t come.”

What Chris Adrian is working on