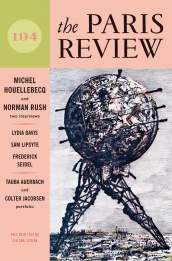 Lorin Stein’s first issue of The Paris Review is, like the books he’s edited and the magazine’s new beautifully redesigned website, elegant, edgy, and surprising, an unusual but cohesive mix of writing characterized by intelligence and precision and, frequently, humor.

As Stein observes in his Editor’s Note, by the time The Paris Review was founded in 1953, critics had already “been lamenting the Death of the Novel, and fiction in general, since the end of World War II.” The magazine sought to — and did — prove them wrong “not by argument, but by example,” finding and publishing “not things they considered competent, or merely worthy, but things they actually loved.” Because Stein has always done the same, he and the editorial team he’s assembled are a natural fit.

The issue includes an interview with the great Norman Rush. He discusses his early experimental efforts and the evolution of his writing process, and invites his wife Elsa into the conversation as he reveals how deeply involved, on myriad levels, she is in his work. “[H]er patience with my arcane fiction was part of a greater patience, over a sort of battle we waged for years,” he says. “Some couples don’t ask much of one another after they’ve worked out the fundamentals of jobs and children. Some live separate intellectual and cultural lives, and survive, but the most intense, most fulfilling marriages need, I think, to struggle toward some kind of ideological convergence.”

Rush’s sentiments about the difficulty and sorrow of endings — “Dostoyevsky died still intending to write another volume of The Brothers Karamazov. It’s like a knife in my heart that he didn’t” — find a partial echo in the Michel Houellebecq interview: “the last pages of The Brothers Karamazov: not only can I not read them without crying, I can’t even think of them without crying.”

Sam Lipsyte always makes me cackle, and “The Worm in Philly” is probably my favorite of his stories so far. If you’re unsure whether to read Lydia Davis’ new translation of Madame Bovary, the delightful “Ten Stories From Flaubert” will stoke your appetite. And April Ayers Lawson’s “Virgin,” a fascinating and nuanced portrait of frustrated male desire, is as frankly sexual in its way as any of Mary Gaitskill’s work, and somehow also — I know this sounds paradoxical — sort of old-fashioned in its restraint.

But it was John Jeremiah Sullivan’s affectionate reminiscence of the Southern writer Andrew Lytle that made me tear up on the subway and almost miss my stop. Born in Kentucky and raised in Indiana, Sullivan knows and masterfully, self-mockingly evokes the problem of the semi-Southerner, of growing up a Yankee and being “aware of a nowhereness to my life … a physical ache.” By the time he enrolled at the University of the South, he says, “Merely to hear the word Faulkner at night brought forth gusty emotions.”

Lytle was 92 when he offered to mentor Sullivan, then a college dropout living in Cork. (“He told me I was a writer, but that I had no idea what I was doing. ‘This is where the older artist comes in.’”) When Sullivan arrived at the old man’s front door several months after receiving the invitation, Lytle was so frail he did not rise from the sofa but “gestured at the smoky stone fireplace with its enormous black andirons and said, ‘Boy, I’m sorry the wood’s so poor. I had no idea I’d be alive in November.’” Soon Lytle was addressing Sullivan as “beloved” and asking him “to quit showering every morning, so that he could smell me better. ‘I’m pert’ near blind, boy,’ he said. ‘How will I find you in a fire?’”

It’s a virtuosic essay — generous, insightful, entertaining, and honest. “I tried to apply his criticisms, but they were sophisticated to a degree my efforts couldn’t repay,” Sullivan says. “He was trying to show me how to solve problems I hadn’t learned existed.”

The discount code has expired, but pick up an issue, see what you think.

Those who live in Pittsburgh, Chicago, San Francisco, Claremont, Los Angeles, or New York can catch Stein on his whistle-stop tour. For those who don’t, there are consolations: all fifty-seven years of interviews, apart from some of the most recent, are now available in full online.

(I should mention that I contributed a diary to The Paris Review Daily, the blog edited by Thessaly La Force, over the summer.)