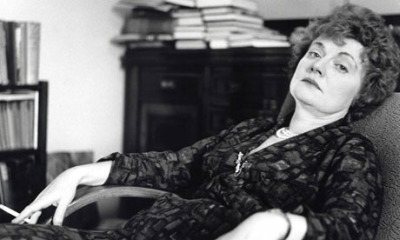 I’ve been gearing up for Martin Stannard’s Muriel Spark biography by revisiting (and reading more of) her own fiction, which was evidently treated as unsaleable for much of her career. In 1999, she told Janice Galloway:

“I used to be sold the idea that what I was writing was some little cult and people wouldn’t buy the things. Publishers used to go on that way until I just got rid of them.”

“I got new publishers.”

Here, for no particular reason except that I’m caught up in scrutinizing her work, are the first sentences of nine of her twenty-two books:

The Comforters: “On the first day of his holiday Laurence Manders woke to hear his grandmother’s voice below.”

Memento Mori: “Dame Lettie Colston refilled her fountain pen and continued her letter: ‘One of these days I hope you will write as brilliantly on a happier theme. In these days of cold war I do feel we should soar above the murk & smog & get into the clear crystal.'”

The Prime of Miss Jean Brodie: “The boys, as they talked to the girls from Marcia Blaine School, stood on the far side of their bicycles holding the handlebars, which established a protective fence of bicycle between the sexes, and the impression that at any moment the boys were likely to be taken away.”

The Girls of Slender Means: “Long ago in 1945 all the nice people in England were poor, allowing for exceptions.”

The Driver’s Seat: “And the material doesn’t stain,” the salesgirl says.

Loitering with Intent: “One day in the middle of the twentieth century I sat in an old graveyard which had not yet been demolished, in the Kensington area of London, when a young policeman stepped off the path and came over to me.”

The Only Problem: “He was driving along the road in France from St. Dié to Nancy in the district of Meurthe; it was straight and almost white, through thick woods of fir and birch.”

A Far Cry from Kensington: “So great was the noise during the day that I used to lie awake at night listening to the silence.”

The Finishing School: “You begin,” he said, “by setting your scene. You have to see your scene, either in reality or in imagination.”

Fiction & the hierarchy of language education in India