Writers and steaks and frazzled eggs 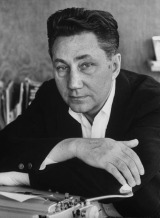 I intend to try Alex Balk’s method of cooking a fucking steak, although I’m pretty sure the first principle of the native Texan’s catechism is “use a grill.” I don’t think you’re even allowed to call it steak in my mother’s house if it wasn’t cooked over an open flame (or maybe chicken-fried). For another tempting pan-cooked variety, see Norman Mailer’s technique, which “scares the hell out of pets and children.”

Both of these recipes remind me of Peter De Vries (pictured), author of one of my very favorite novels, who contributed to The Great American Writers’ Cookbook his secret recipe for “Frazzled Eggs,” and who asserted in a 1949 New Yorker essay (or is it fiction?) that the “gourmet and the person who is merely fond of food have no connection.”

The person who is fond of food likes things that are edible but not necessarily delicacies (steak, sweet corn, apple pie with cheese), while the gourmet likes things that are delicacies but not necessarily edible (brains, kidneys, snails, etc.). One of several cooks who recently banged their luggage in and out of our door had a formidable history of ministration to the latter. Eighteen years in the employ of an aging friand called Pomeroy had left her skilled in the frazzled nuance but helpless before a family pot roast… One gland after another crossed our table, leaving as its single nutritive effect hunger at midnight. I took to padding downstairs in slippers and robe to the icebox, there to find nothing but food for thought — leftover chicken livers and the cooling lobes of cattle…

I know, I know, a cook. High-class problems, heart bleeds, etc. It’s an entertaining essay, though.

Here’s De Vries on his eggs, which I’ve never attempted to replicate:

I don’t cook — except for steaks and chops, which isn’t cooking, and one conceivable slight invention which might rate inclusion in this collection. A breakfast I call Frazzled Eggs, which consists in frying them so you scarcely need the bacon, and thus cut down on your cholesterol, if that’s an aim. Have two eggs broken and ready in a crock, or cup, or ramekin. On a hot burner set a small skillet with plenty of cooking oil in it… When the oil is so hot it smokes, slide the eggs together into the skillet. They will instantly brown and blister up, like potato chips. Take the skillet and roll the hot oil around so the eggs are browned well to the edges, which should crinkle and fluff up. Let them simmer for a few minutes on a lowered flame (all the searing you want you will get immediately) either turned over if you want them over easy, or under a lid with a few drops of water in the pan to steam them a little, puffing them up, if you prefer them basted sunny-side up. If you’ve browned and potato-chip-blistered the whites just right, you won’t miss the bacon too much, though of course with bacon, ham or sausage they’re always that much better. This with a wedge of hot cornbread slathered with marmalade or jelly, together with a cup of strong coffee, and you’re ready to face the day.

Somewhat related: Jeffrey Frank’s 2004 essay on De Vries; a call to restore De Vries to print; gearing up to read De Vries; my praise for his The Blood of the Lamb, and more, and more. And on the recipe front: an acknowledgment that seeking information about a favorite writer’s diet may be the lowest form of literary boondoggle; Ford Madox Ford’s garlic chicken, and more; also, an Awl reader makes Balk’s steak, pronounces it fucking good.

A writer he used to revere