On the Newtons, blood, and bank-robbing cousins 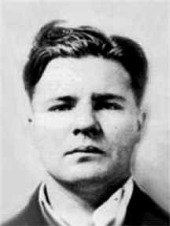 My dad’s forebears were glad to tell you about my grandma’s Pre-Revolutionary Virginian ancestor and other lofty relations, but they seemed to suffer from a peculiarly targeted kind of amnesia when you started asking about the Newton line.

I always assumed this caginess was limited to my little branch of the family tree, but recently I tracked down my granddad’s cousin, now 83, to see if he could verify that Jesse Newton, Arkansas spiritous liquors retailer, is in fact our ancestor. He could not. “We had the same problem that you had,” he told me. “We just could not get anyone to give us information — it was as if the Newton family started with Minnie.”

He theorized that we’re related to the Newton Boys, “America’s most successful bank robbing family,” which would sort of delight me, actually. A recent (fascinating) article in Hill Country Magazine describes them this way:

By the time they were captured (after a $3 million train robbery near Chicago in 1924), the “Newton Boys” had netted more loot than the James Gang, the Dalton Boys and Butch Cassidy combined. During that time, they had never killed anyone, and (in their rare daytime crimes) were famous for the courtesy with which they treated their victims.

But while their family was descended from a Jesse Newton of Arkansas, and mine probably was too, they’re not the same man. So far I haven’t found any tie between our lines, just similar names and close proximity.

Pretty Boy Floyd (above), on the other hand, could be my 8th cousin on my dad’s mother’s side, according to Ancestry.com.