Hynes’ Aspern Papers: one for the Hollywood wish list 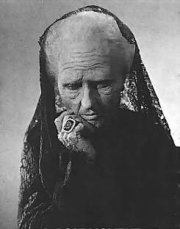 James Hynes, literary-horror storyteller extraordinaire, writes to second The Aspern Papers love — and reveals that he once wrote a screenplay based on the Henry James novella.

“It got kicked around by a few people in the film biz (the way a cat kicks around a piece of prey before he snaps its neck),” he says, “but nothing ever came of it, and I never saw a dime from it. But it was fun to do. It’s a great piece of storytelling.”

Reaffirmation, just in case your conviction was flagging, that Hollywood has no taste.

The image is of Agnes Moorehead in the 1947 Aspern Papers adaptation The Lost Moment, which I haven’t seen but will track down now.