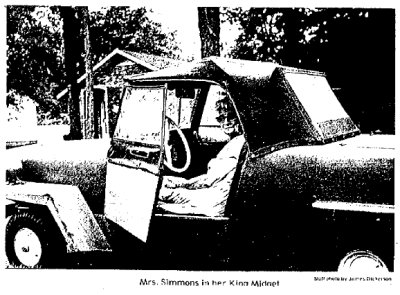 Maud is a nickname now, one most of my friends call me, but it started as a pen name. I chose it years ago as a sort of homage to Maude Newton, my great-great aunt, a woman nobody wanted to answer questions about.

For the longest time, I only really knew about her marital separation by peppering. Then census data told me her husband’s last name: Simmons. And in a letter earlier this fall, my granddad’s cousin mentioned that Maude was a schoolteacher.

Now here she is, above, at 92, in her King Midget, The World’s Lowest-Priced Car. The photo is taken from James Dickerson’s May 1977 story for the Delta Democrat-Times.

Apparently Maude had seen the company’s ad in National Geographic and called up to say that she’d like to be the Midget Motor Corp dealer for Sunflower County, Mississippi. The top brass were amenable.

When her first King Midget arrived on the train from Athens, Ohio, more than 12 years ago, Mrs. Maude Simmons, 92, of Drew said that Main Street was filled with curiosity seekers.

“It was my first car,” Mrs. Simmons said. “And I couldn’t drive an inch. The man who taught me was a driving instructor at the local school, and he taught me all I needed to know in about two or three days.”

Although she got a deal on the car, which cost her $500, Maude told Dickerson “it was not an easy decision to make.”

“‘My family didn’t want me to do it,’ she said. ‘So I listened to them for about a year. Then I wrote the company anyway and told them to send me a car.'”

As for the King Midget itself, Dickerson reports:

Not everything has worked out the way she planned, though, over the years she has been unable to sell a single King Midget…. But there are also advantages of a unique sort.

“I ran off the road once,” she said. “I wasn’t sure what I was going to do about it, when some fellow came along and helped me out. It wasn’t any trouble at all. He just pulled it out of the ditch by hand.”

The article also reveals that Maude’s house was filled with books and magazines, and that she met Simmons in Indiana, where she had a job in an architectural office. “‘I learned how to do house plans there,'” she explained. “‘In fact, I did the plans for this very house I’m living in right now.”

She also remembered teaching in southern Mississippi “‘when we had Halley’s Comet.'” “‘That was 1910, the year Mark Twain died,'” she adds. “‘When the comet came over we all went outside to have a look.'”

Twain was born shortly before it passed, and died the day after its return. “It will be the greatest disappointment of my life if I don’t go out with Halley’s Comet,” he reportedly said. “‘The Almighty has said, no doubt: ‘Now here are these two unaccountable freaks; they came in together, they must go out together.'” 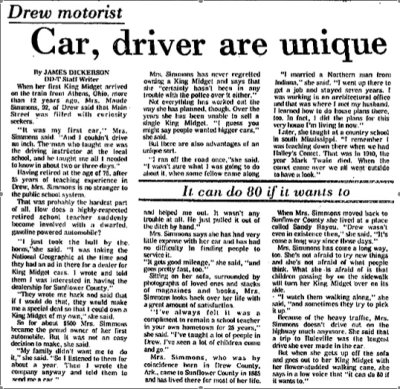