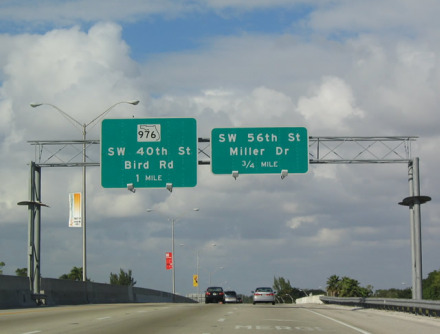 And it’s been weird, over the years, to watch my experiences and the people from my past morph into completely different episodes, completely unrelated characters, so that fact has given way, I hope, to some kind of deeper emotional truth. In case anybody unearths my old Story South story, which has made its way (in significantly altered form) into my novel, for instance: I feel compelled to say that the churchgoer I mentioned in the LA Times essay, the one who showed up at our door naked, has transformed into “Luke” — a character who is far, far less like the man himself than he is like my friend Rocky, A/K/A Robert Moak, A/K/A a churchgoer and crack addict who later perished in Hurricane Andrew when he tried to weather the storm in an abandoned houseboat.

The real naked guy actually did make the news for stealing a cop’s car to get to us, though. The St. Pete Times (left) and other papers around the state picked up the story.

Here’s a slightly expurgated version of The Miami Herald article:

Coral Gables Officer Ron Greene said he was only trying to do his job and shield residents from a full-fledged display of human anatomy. But police and city officials say that is no excuse for what happened. No doubt about it: The naked man who stole Greene’s patrol car has caused the policeman some grief.

The incident earned him a four-day suspension because the police administration said Greene did not follow proper police procedure when he apprehended the 18-year-old in his birthday suit.

But Greene, backed by the police union, said last week he did nothing wrong and plans to let an arbitration board decide who is right.

He blamed the city for not providing him with the right equipment to do his job by giving him a car without a cage — the plexiglas barrier that forms a protective wall between the front and back seats.

Said Greene, who in his six years with the Gables has repeatedly asked for cars with cages: “It’s like giving me a gun and taking away my bullets. I wasn’t given the proper tools to do my job.”

Greene put him into the patrol car’s back seat and asked the obvious question.

“He said he had conversations with God,” Greene said. “He told me God told him to take his clothes off.”

The officer said he intended to take [X] into protective custody under the Baker Act, which allows police to pick up a person who seems likely to injure himself or others or appears to need medical treatment.

[X], who police said was mentally disturbed, pointed to his clothes about a half block away under Metrorail. Greene drove to the spot and got out to pick up the blue pants. In that instant, [X] leaped over the back rest, threw the car into gear and pushed the gas pedal with his hand.

[X] left Greene running in the dust and sped west across the city, finally ending up on Bird Road pursued by Gables police.

But before coming to a stop with a flat tire in [my mom’s & stepfather’s] yard in the 8300 block of Southwest 41st Terrace, [X] careened into the yard on Southwest 46th Terrace where Franciso Bosquet was working. Bosquet twisted his ankle as he jumped out of the way.

Gables Officer Paul Pitts chased [X] through an alley, tackled him, handcuffed him and sat on him until fellow officers arrived.

Police charged the teen-ager — who called himself a minister and gave his addresses as 2621 Lincoln Ave. and 1790 SW 15th St. — with grand theft, reckless driving, fleeing a police officer and fleeing the scene of an accident with injuries. The court has ordered [X] to undergo a psychiatric evaluation, said his lawyer Paul Korchin.

And Greene found himself charged with negligence and carelessness by Chief Ken Bush: He should have handcuffed [X] as police do all prisoners. He should have removed the ignition keys and locked the doors when he got out to pick up the pants. He should have called for a backup with a cage to transport the prisoner.

But Greene said he was not arresting [X], simply taking him into protective custody to get him off the streets. He was not, Greene stressed, a prisoner.

Capt. Lou Mertz, who heads internal affairs investigations, said [X] was a prisoner in the sense that he was taken off the street involuntarily, and so should have been handcuffed.

“If I had handcuffed him with his arms behind his back, I would have had a hell of a time putting them (the pants) on,” Greene said.

And besides, [X] was not violent and the Baker Act does not require handcuffing, Greene said.

Not everyone put into a police car is always handcuffed, several officers said, particularly the elderly and children.

[X] is now being treated for emotional problems at Highland Park psychiatric hospital, said Korchin, his attorney. Greene and K-9 officer Mark Scanlan, president of the police union, say the whole thing could have been avoided if there had been a cage in the car.

“All cars don’t have cages,” Mertz said. “But there are ways to secure prisoners without cages. There are handcuffs. There are seatbelts. There are assisting officers.”

Fifteen of the Gables’ 23 police cars have cages. Capt. J.J. Carroll said that five more have been ordered, but that there are times when a cage is more a hindrance than a help.

“We transfer people in a police car who are not always prisoners,” Carroll said. “And we have some officers who are really too big to be in a car with a cage.”

Carroll said Greene should have waited for a backup car with a cage to arrive before doing anything.

Mertz said six other complaints since 1980 have been filed against Greene, 47, who before joining the Gables force spent five years with the Surfside Police Department. Three complaints dealt with breaking departmental regulations, such as failing to assist another officer and drinking cider on duty. The others were dismissed.

Greene asked Chief Bush and City Manager Don Lebrun to rescind the suspension. Both denied his request. But Greene is not ready yet to surrender his fight against the department.

Mertz had no sympathy for Greene.

“When you turn a mental patient loose with a police car,” he said, “that’s pretty serious.”

The hardest thing for a novelist to write