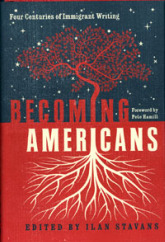 The novelist Felipe Alfau suggests that English imposes a stiff and unnatural logic on the Spanish immigrant. “He is a queer bird, the Americaniard … His health never suffered when he was at home, but the moment he learns a little English, he begins to consult the directory for physicians and psychoanalysts.” Meanwhile, Gary Shteyngart, when visiting his native Russia, pines for precisely this “American balance, the sense that rationalism, psychiatry and a few sour-apple martinis can take care of the past.” To soothe himself there, to drown out the Soviet anthems and other “pieces of primordial identity” that surface through “the back channels of memory,” Shteyngart speaks to himself in English, to no avail.

“English is the language in which I’ve become an adult,” writes Eva Hoffman. “In Polish, whole provinces of adult experience are missing. I don’t know [the] words for ‘microchips,’ or ‘pathetic fallacy,’ or The Importance of Being Earnest.”

All of these writers’ experiences, and many, many more, are collected in Ilan Stavans’ expertly-curated new anthology, Becoming Americans. My brief appreciation is up at NPR today. An excerpt:

The narrator of Chang-Rae Lee’s novel Native Speaker observes that, for someone wanting to take advantage of immigrants, “The most important thing was that they hadn’t been in America too long.” This axiom is borne out in “Journey to Pennsylvania,” Gottleib Mittelberger’s 1674 expose of the travails of German immigrants who traveled to America on credit and were sold into indentured servitude. Their story becomes all the more powerful when laid aside accounts of later brutalities.

A harrowing passage from Edwidge Danticat’s memoir Brother, I’m Dying recounts with relentless, heartbreaking candor the story of her 81-year-old uncle’s death in Homeland Security custody five years ago. Although Joseph Dantica had a valid visa â€” one on which he’d entered the country from Haiti many times before â€” he applied for asylum on arrival in South Florida, whereupon his medications were confiscated and he was quizzed suspiciously, and, despite suffering from throat cancer and being able to speak only through a voice box, locked up in Miami’s notorious Krome detention center. So shocking is the account of his neglect, mistreatment and decline that it would be implausible in dystopian fiction; even as Dantica vomited through his tracheotomy hole before falling unconscious at an asylum hearing, the government’s medic insisted he was faking.

For more on the anthology, see Geoff Wisner’s review and Diane Lederman’s short profile of Stavans.