On A.S. Byatt’s The Children’s Book 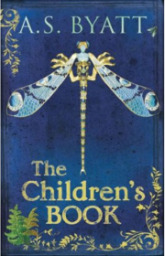 In the London Review of Books this week, James Wood adjudged A.S. Byatt “a very ordinary grown-ups’ writer and a very good children’s writer” — a verdict which, notwithstanding her lapses into didacticism, I find ludicrous.

My review of Byatt’s latest novel, The Children’s Book, is at Barnes & Noble Review today. An excerpt:

A.S. Byatt published her first novel in 1964 and, over the ensuing two and a half decades, produced a series of successors that were admired by critics but had little reach beyond intellectual circles. Yet when Possession, her literary romance and thriller, became a bestseller on its publication in 1990, the author evinced no surprise. Quite the contrary: this time, she said, she had written with a larger audience in mind. In tone and scope, the resulting novel proved a gripping and original blend of the Victorian and postmodern, serving up two love stories, some improbably sexy critical theory, and countless deft pastiches of Rossetti and Browning. “I knew people would like it,” Byatt told The New York Times. “It’s the only one I’ve written to be liked, and I did it partly to show off.”

Nearly twenty years later, still mashing up genres, switching historical periods, and unfolding stories with supple and convincing omniscience, the author has continued to challenge and entertain her readers. She has ventured into fairy tales, suggesting that “they form, or until recently formed, the narrative grammar of our minds.” She has excoriated grown-up readers of the Harry Potter books, claiming that J.K. Rowling’s series “speaks to an adult generation that hasn’t known, and doesn’t care about, mystery.” And she has questioned the practice of including real-life people in fiction, arguing that that using an actual person “as the single original in fiction” inhibits creativity by failing to leave room for “the necessary insertion of inventions.”

By her own admission, Byatt peoples her books with composites. Types, she says, tend to recur. Olive Wellwood, the preening, selfish, and blinkered, if basically good-hearted, children’s writer at the center of her latest novel, is one part D.H. Lawrence, one part E. Nesbit, two parts Alison Uttley, a dash of Rebecca West, and, of course, a great deal of the author’s imagination, all steeped in the pot of her moralizing. Writers and other artists who steal too directly from other people for inspiration fare badly in The Children’s Book, another brainy crowd-pleaser — a vast Edwardian-era panorama so spellbinding it invaded my dreams, but also frustrated me, in the end, as characters’ fates bent to Byatt’s ethical agendas.

The rest is here. For more on Byatt and The Children’s Book, see Kera Bolonik’s excellent interview for Bookforum.

Getting acquainted with Müller’s fiction

The Depression, diphtheria, and my mom’s half-sister