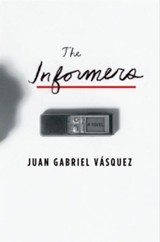 Speaking of Nazis in South America, Colombian writer Juan Gabriel Vásquez’s first novel, The Informers, is set in 1990s Bogotá, but looks back to the city’s World War II history as a son tries to unravel the lies and omissions his father built their lives around.

Translator Anne McLean “exchanged 200 e-mails” with the author in the course of translating the novel, and her diligence shows. The prose is taut but expressive, every sentence so precise I’m inspired to try dusting off my rusty kindergarten-level Spanish and comparing the original.

My brief appreciation of the book is up at NPR. An excerpt:

Even the most original writers labor under the shadow of their elders. The critic Harold Bloom has argued that the truly great artist overcomes this anxiety of influence only by “killing the father,” his or her predecessor, through misinterpretation. Whether or not this is true, the relationship between writers who are, literally, parent and child, often takes on a combative quality.

Martin Amis, for instance, attributes his tolerance for criticism to his father Kingsley’s candid disapproval; the older writer announced that he “couldn’t get on” with Amis’ second book, and later threw the much-acclaimed novel Money across the room. Auberon Waugh, meanwhile, was so haunted by the father who called him, at seven, “clumsy and disheveled, sly, without intellectual, aesthetic or spiritual interest,” that he eventually wrote a memoir called Will This Do?

Generational tensions of both the familial and cultural sort form the thematic center of Colombian writer Juan Gabriel Vasquez’s inventive and intricately plotted The Informers. As the novel opens, its narrator, Gabriel Santoro, receives a surprise phone call from his estranged father, a renowned speechwriter, professor and critic, and learns that he will soon undergo risky surgery for an obstructed artery. The two men haven’t spoken for a couple of years, since Santoro, Sr. published a hostile review proclaiming his son’s first book a failure.

For more, see Michael Shaer in Bookforum, Michael Orthofer at The Complete Review, Mark Asch for The L Magazine, Georgina Jiménez in The Latin American Review of Books, Isabel Obiols in El País (Spanish), Richard Lea’s profile in The Guardian, an interview in Miami’s El Nuevo Herald (Spanish), and, at PEN, the author’s own remarks on writing The Informers.

Mantel on her win, and her planned Wolf Hall sequel