If I were Eve, I would have done the same damn thing 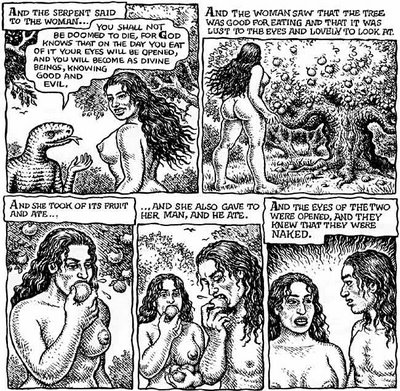 Blame R. Crumb for this rash of Bible posts. His new illustrated Genesis has reanimated the characters in my mind and led me back to all the “moral lessons” I puzzled over as a child.

For instance: Yes, Eve disobeyed God, so that Christians revile her, but His rule was condescending, and His punishments were way too severe.

Really, who could blame Eve for eating of the fruit of the tree of the knowledge of good and evil when she just wanted to be wise? I suppose walking naked with the Lord and Adam, surrounded by plants and animals, was pretty idyllic, but let’s be real. One of her companions was omniscient and omnipotent, and had created the whole world in a week. Why should she have been fulfilled playing the naïf every single day, for her entire life? The Garden of Eden sounds so boring — almost as tedious as heaven.

In the King James, the Lord commands Adam and Eve, in the garden: “But of the tree of the knowledge of good and evil, thou shalt not eat of it: for in the day that thou eatest thereof thou shalt surely die.”

Then the serpent appears.

4: And the serpent said unto the woman, Ye shall not surely die:
5: For God doth know that in the day ye eat thereof, then your eyes shall be opened, and ye shall be as gods, knowing good and evil.
6: And when the woman saw that the tree was good for food, and that it was pleasant to the eyes, and a tree to be desired to make one wise, she took of the fruit thereof, and did eat, and gave also unto her husband with her; and he did eat. (Emphasis added.)

At some point, after reading and rereading this passage and the verses that follow, I concluded that God excoriated Eve more roundly and punished her more severely than He did Adam not because she was more wicked, but because she represented an actual threat. Seeking knowledge, she chose to eat the fruit, whereas Adam ate passively and only because she handed the fruit to him and had tried it first. Adam would never of his own accord have betrayed or competed with God the way Satan did. Eve, on the other hand, aspired to be godlike.

Crumb’s version (above) doesn’t particularly support this reading. His text is taken from Robert Alter’s (generally excellent) translation, and in this interpretation of events, Eve simply falls prey to the serpent’s wiles; she thinks the fruit looks good, so she eats, with no thought for what she might learn. Alter discusses the challenges of translating this section in a detailed note:

“He’s a con man,” Crumb says of the reptile that got Adam and Eve booted from the Garden of Eden. “The serpent represents that part of cleverness and persuasion and deception and flattery, all those qualities which humans are so good at but that we don’t consider our finest virtues.”

Maybe they’re right. But still, in my personal Varieties of Women (Crumb’s history, “from zaftig cave dwellers to Playboy Playmates,” of the female of the species), Eve would eat the fruit for one reason only: she wanted to be smarter than God.

Previously: Doubt: A Syllabus; King Solomon, funny man; and In the beginning, again, with Alter and Twain